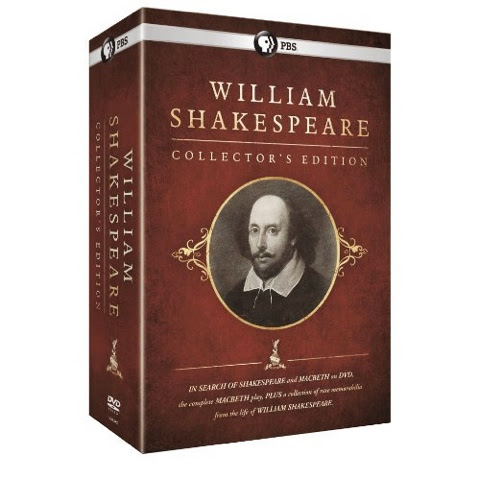 Includes Two Programs, a Collection of Memorabilia, and the Complete “Macbeth” Play

Arlington, Va. – May 1, 2014 – PBS Distribution announced today it is releasing the box set “WILLIAM SHAKESPEARE COLLECTOR’S EDITION.” An outstanding addition to any theater enthusiast’s home video collection, this box set includes an award-winning screen adaptation of Shakespeare’s epic tragedy “Macbeth” and the documentary series “In Search of Shakespeare” on DVD; a collection of rare Shakespeare memorabilia; as well as a complete reproduction of the play “Macbeth,” as published in Shakespeare’s First Folio in 1623.

“WILLIAM SHAKESPEARE COLLECTOR’S EDITION” will be available on June 10, 2014. The two programs within the box set have a run time of approximately 420 minutes on 3 discs. The box set SRP is $39.99.

Poet, actor, and playwright, William Shakespeare is arguably the most famous dramatist in history. His many works are still widely read, performed, and loved almost 400 years after his death, with plays such as “Hamlet,” “Romeo and Juliet,” and “Macbeth” telling stories that resonate as much with audiences today as they did in Elizabethan times.

In the DVD “Macbeth,” Sir Patrick Stewart (“X-Men”) and Kate Fleetwood (“Harry Potter and the Deathly Hallows: Part 1”) star in Rupert Goold’s gripping film adaptation of Shakespeare’s “Scottish Play.” Goold’s cinematic reinterpretation expertly retains the atmosphere and tone of the critically acclaimed stage production, but in an edgy twist relocates the bloody action to an underground netherworld. The result is a compelling masterpiece showcasing a potent quest for power in the modern world.

He is one of the most famous Englishmen in the world, yet our biographical knowledge of William Shakespeare remains scant. Within “In Search of Shakespeare,” Michael Woods – with the help of the Royal Shakespeare Company and many experts and historians – unravels the mystery to tell the true story of the great bard. Relive the key events that shaped his life, meet the people who influenced his work, and explore the brutal world in which he lived as we discover how he became one of the greatest writers anyone had ever seen.

In addition to these two films, this box set features the full text of “Macbeth,” one of Shakespeare’s greatest tragedies, beautifully reproduced from Shakespeare’s First Folio, as well as a collection of memorabilia. The selection of Shakespeare memorabilia was reproduced from original materials at the Bodleian Libraries, University of Oxford, England. The collection includes Shakespeare’s baptism and death notices, his last will and testament, renowned 16th-century maps of Warwickshire and London, and a selection of portraits, sonnets, and handwritten notes.