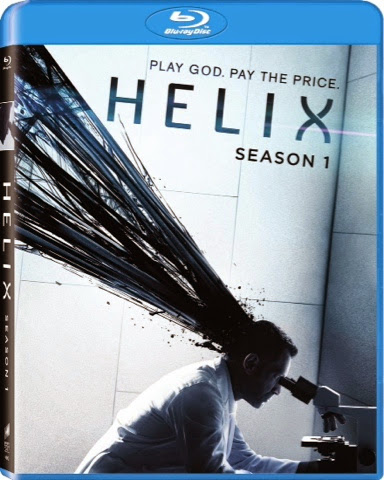 "…well-made, solidly scary and disturbing all the same.”

CULVER CITY, CALIF. (May 5, 2014) –HELIX, Sony Pictures Television’s intense sci-fi series, debuts on Blu-ray™ and DVD July 1when Sony Pictures Home Entertainment releases HELIX: THE COMPLETE FIRST SEASON. The freshman season of this gripping thriller introduces audiences to a team of scientists who embark on a dark, Arctic expedition to research a viral outbreak with terrifying effects. While there, they find themselves exposed to grave dangers, with the fate of all humanity hinging on their survival.

All 13 episodes of HELIX will be available on the three-disc Blu-ray™ and DVD sets, along with cast and crew commentaries, deleted scenes and four all-new featurettes.  “Dissecting the Characters,” the first all-new featurette, studies the characters and the dynamic interpersonal relationships that fuel the series.  “The Art of Isolation,” the second all-new featurette, explores the approach to creating a realistic Arctic research center.  “The Future of Disease” offers insight into findings in the field of medicine and the inspiration behind a possible life-threatening pandemic, and “Ronald D. Moore: The Outlier of Science Fiction” presents never-before-seen interviews with Ron Moore and his unique perspective on developing a new compelling series. In addition, fans will get two Blu-ray™ exclusive featurettes: “Writing the Tension,” an inside look at the process of writing a serialized thriller, and “Fabricating the Plague,” revealing the state of art effects techniques used to create a devastating plague in the show.

Synopsis
HELIX is an intense thriller about a team of scientists from the Centers for Disease Control who travel to a high-tech research facility in the Arctic to investigate a possible disease outbreak, only to find themselves pulled into a terrifying life-and-death struggle that holds the key to mankind’s salvation or total annihilation.