The Greatest Sci-Fi Movie Never Made! 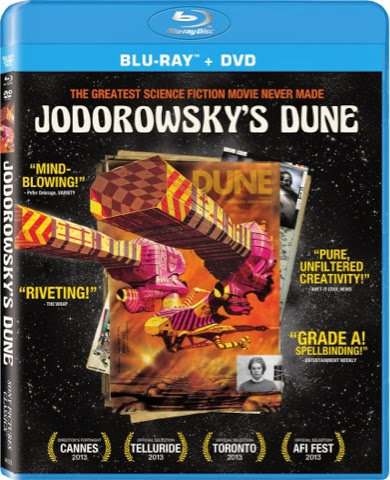 CULVER CITY, Calif. (May 27, 2014) – An official selection at the 2013 Cannes, Telluride, Toronto and AFI Film Festivals, the critically acclaimed JODOROWSKY’S DUNE will debut July 8 on Blu-rayä Combo Pack* and Digital from Sony Pictures Home Entertainment.  As an auteur whose midnight movie classics, El Topo and The Holy Mountain, captivated enthusiastic audiences, cult film director Alejandro Jodorowsky set his sights on his most ambitious project yet – a feature film adaptation of Frank Herbert’s futuristic best-seller, “Dune.” Although his dreams were never realized, the story of Jodorowsky’s “Dune” has placed him at the vanguard of international cinema.

In making the Sony Pictures Classics’JODOROWSKY’S DUNE, Jodorowsky granted director Frank Pavich unprecedented access to his production materials on the ill-fated project, including the extraordinary hard-bound book of meticulous story boards, which Jodorowsky used as a “calling card” to pitch his film to Hollywood studios. Jodorowsky also provided candid and comprehensive interviews about his ambitious screenplay, and his global search for a stellar cast and crew to bring his vision to the screen. Special features on the Blu-ray Combo Pack for JODOROWSKY’S DUNE,winner of the Audience Award and Best Documentary at the 2013 Fantastic Fest,include more than 45 minutes of deleted scenes.

In 1975, Alejandro Jodorowsky began work on his most ambitious project yet.  Starring his own 12-year-old son alongside Orson Welles, Mick Jagger, David Carradine and Salvador Dali, featuring music by Pink Floyd and art by some of the most provocative talents of the era, including H.R. Giger and Jean “Moebius” Giraud, Jodorowsky’s adaptation of the classic sci-fi novel DUNE was poised to change cinema forever.

JODOROWSKY’S DUNE has a running time of 90 minutes and is rated PG-13 for some violent and sexual images and drug content.