CELEBRATE THE 10TH ANNIVERSARY OF DIRECTOR J.J. ABRAMS’ THRILLING ADVENTURE AS IT ARRIVES ON 4K ULTRA HD FOR THE FIRST TIME 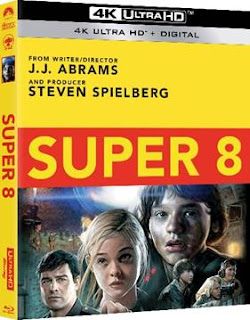 Newly Remastered Film Debuts May 25, 2021 with Over Two Hours of Bonus Content

The 4K Ultra HD release includes access to a digital copy of the film and more than two hours of previously released bonus content as detailed below:

SUPER 8 tells the story of six friends who witness a train wreck while making a Super 8 movie, only to discover that something unimaginable escaped during the crash.  They soon discover that the only thing more mysterious than what it is, is what it wants.

Posted by GenreOnline.net at 11:12 AM No comments: 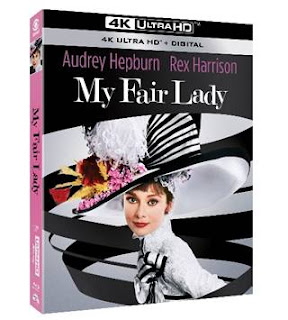 Relive the romance, music, and comedic charms of the indelible classic MY FAIR LADY, debuting on 4K Ultra HD May 25, 2021 from Paramount Home Entertainment.

Winner of eight Academy Awards*, including Best Picture, MY FAIR LADY also won the Best Picture Golden Globe® and was selected for the Library of Congress’ National Film Registry.  Adapted from the Broadway stage hit, the film stars Rex Harrison as Professor Higgins, a role that earned him the Oscar® for Best Actor in a Leading Role, and Audrey Hepburn as the unforgettable Eliza Doolittle.

The 4K Ultra HD release features stunning picture quality courtesy of a recent 8K film transfer, as well as English 7.1 Dolby TrueHD sound for the finest home presentation.  The 4K Ultra HD/Blu-ray Combo also includes access to a digital copy of the film and more than two hours of previously released bonus content as detailed below:

o   Wouldn’t It Be Loverly?

This beloved adaptation of the Broadway stage hit stars Audrey Hepburn as Eliza Doolittle, a sassy, working-class London street vendor, and Rex Harrison as the elitist Professor Higgins, who attempts to turn Eliza into a sophisticated lady through proper tutoring. But, when the humble flower girl blossoms into the toast of London society, her teacher may have a lesson or two to learn himself.

Posted by GenreOnline.net at 10:55 AM No comments:

Today on its social channels, Legendary Comics exclusively debuted the new covers for its upcoming Godzilla vs. Kong prequels (Kingdom Kong and Godzilla Dominion) as well as for the Monsterverse Titanthology Vol 1, all by acclaimed artist Arthur Adams. 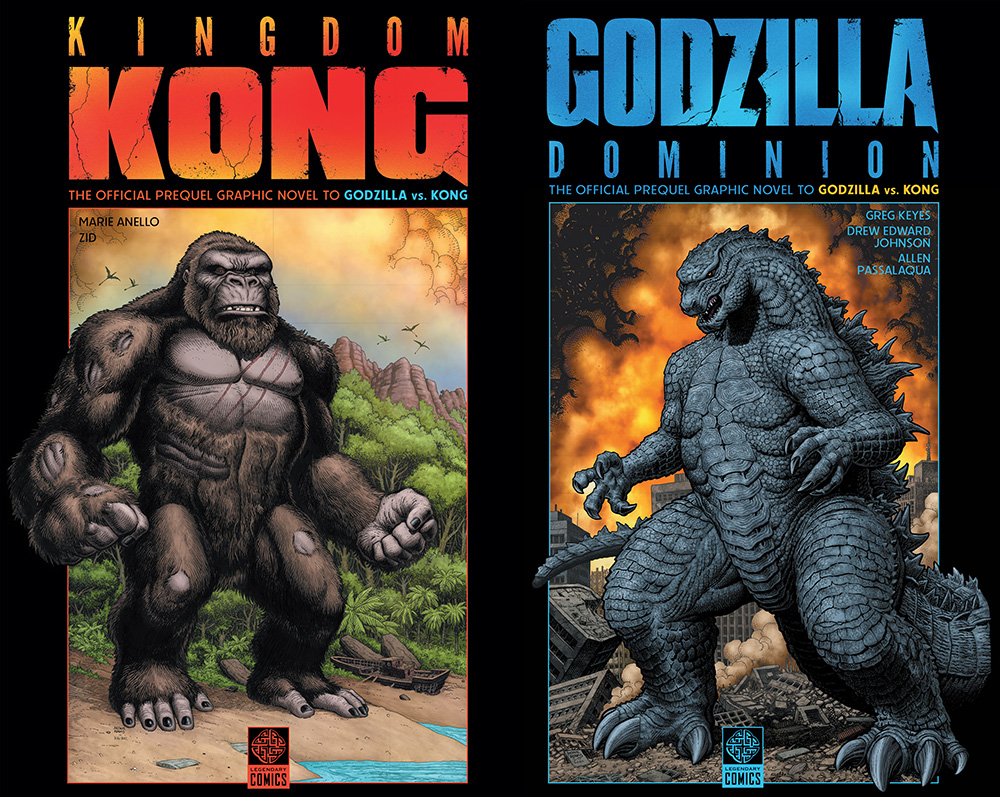 A sequel to the graphic novel Skull Island: Birth of Kong and a prelude to the film Godzilla vs. Kong, the upcoming prequel graphic novel,Kingdom Kong, will follow a group of highly skilled military pilots gathered together on Skull Island to see who has ‘the right stuff’ to take on a dangerous mission into the hollow earth. One of the pilots, Audrey, is haunted by the memories of a monstrous clash with one of Godzilla’s titanic rivals that left deep scars. When Skull Island is attacked by Camazotz, a bat-like Titan, Audrey must come to terms with her inner demons, and finding his home newly threatened, Kong must rise to face this usurper that would plunge the world into perpetual night. Kingdom Kong is written by Marie Anello (Shout Out) with art by ZID (Legendary Comics’ Skull Island: The Birth of Kong; Trick ‘r Treat: Days of the Dead; Spectral: Ghosts of War).

Godzilla Dominion—the prequel graphic novel written by Greg Keyes (the Age of Unreasontrilogy; three New York Times bestselling Star Wars novels in the New Jedi Order series) with art by Drew Edward Johnson (DC’s Wonder Woman, Supergirl; Legendary Comics’ Godzilla Aftershock)—will feature a unique story that picks up after the events of the film Godzilla: King of the Monsters, where the Titans have risen and the reign of Godzilla has begun. As told entirely from Godzilla’s point of view, the graphic novel brings new insights into the King of Monsters: his habitats, ancient rivalries, encounters with new Titans, and other challenges. As his new era of dominance is tested, a coming confrontation with another Kinglooms. 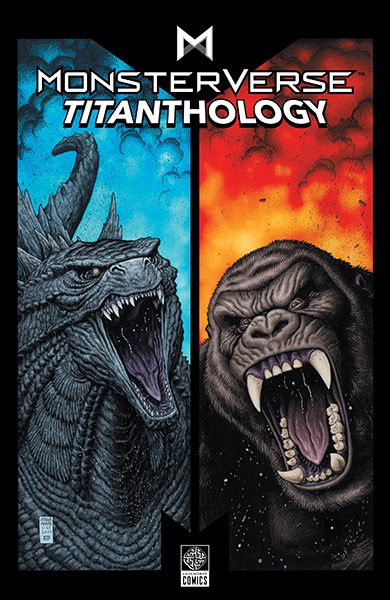 For new readers wanting to discover the backstories of Godzilla and Kong for the first time or fans revisiting their favorite adventures, the Monsterverse Titanthology Vol 1 brings the previously released graphic novels, Skull Island: The Birth of Kong (2017) and Godzilla: Aftershock (2019), together in one legendary volume for the first time ever.

Posted by GenreOnline.net at 4:58 PM No comments:

All Aboard!!! - Infinity Train: Book Two - Explore The Mystery On 5/25 When the DVD Comes To A Town Near You! 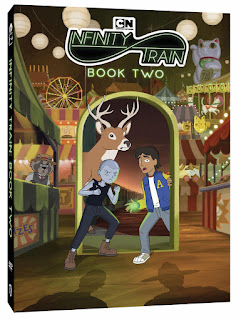 All Aboard for a Mind-Bending Journey
INFINITY TRAIN: BOOK TWO
The DVD Arrives at Your Destination on May 25th
From Warner Bros. Home Entertainment
BURBANK, CA (February 24, 2021) – Every train car is an adventure, and nothing is what you expect! Created by Owen Dennis (former writer and storyboard artist from Cartoon Network’s Emmy-nominated series, “Regular Show”), the critically acclaimed, Infinity Train: Book Two will be released on DVD on May 25, 2021 from Warner Bros. Home Entertainment. Developed through Cartoon Network’s award-winning Global Artists program, Infinity Train’s original short provoked immediate attention, garnering more than 5 million views on its YouTube page to date!
Infinity Train: Book Two follows Mirror Tulip, an escaped reflection from the mirror world, and Jesse Cosay, a 14-year-old jock from Arizona. As the pair finds themselves on the run from the mirror police, themes of identity, friendship and peer pressure arise.
Go on an epic journey with all 10 episodes from the second season and bring home over an hour of bonus features including commentaries, animatics, and an image gallery! Infinity Train: Book Two DVD is priced to own at $14.97 SRP ($18.94 in Canada).
SPECIAL FEATURES
10 EPISODES
DIGITAL
Infinity Train: Book Two is available to own on Digital. Digital purchase allows consumers to instantly stream and download all episodes to watch anywhere and anytime on their favorite devices. Digital movies and TV shows are available from various digital retailers including Amazon Video, iTunes, Google Play, Vudu and others.
STREAMING
Produced by Cartoon Network Studios, all seasons of Infinity Train are now available exclusively on HBO Max  with Infinity Train: Book Four coming soon.
BASICS
Release Date: May 25, 2021
Presented in 16x9 widescreen format
Price: $14.97 SRP ($18.94 in Canada)
Running Time: Feature: Approx. 114 min
Enhanced Content: Approx. 162 min
1 DVD-9s
Audio – English (2.0), Latin Spanish
Subtitles – English
Posted by GenreOnline.net at 10:19 AM No comments: 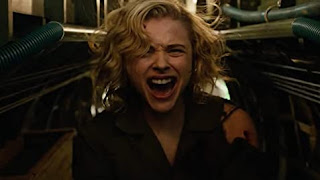 Chloe Grace Moretz stars in this kick ass WW2 themed action thriller/horror film and proves she can carry a movie alone practically since a good chunk of it is claustrophobically focused directly on her stuck in the bottom turret of a World War Two Bomber turret that evokes memories of Dan O’Bannon’s short scripted segment in Heavy Metal though the threat here is not a malevolent intelligence in the form of a green orb or a crew of undead soldiers. It is something that is more psychological, sociological and cryptozoological all at the same time and she manages to carry the viewer faithfully through all of it and still be her own action hero too. This New Zealand genre gem also evokes 1980s genre films that featured New Wave or technological soundtracks whether it be Michael Mann’s The Keep, Ridley Scott’s American theatrical cut of Legend or even cult films like Night of the Comet. That is not to say that it is anything like the films referenced above, but it certainly captures a bit of that feel complete with a rocking song by Kate Bush.

No surprise the film was co-scripted by Max Landis, who is one of the most interesting screenwriters working in his generation of Hollywood currently. The film was co-written and directed by Roseanne Liang, who does a great job with a low budget. Though not the best work I have seen from WETA Digital, they still managed to deliver a great value in special effects that still makes them equal to if not at times excelling over the wizards at Industrial Light and Magic. It is neither too long nor too short. Just the right length for a popcorn streaming flick and Moretz looks at home in her World War Two bomber gear while the movie makes a point to honor our female veterans that helped the allies defeat the greatest evil the Twentieth Century has ever known. Have fun and check it out. Shadow In The Cloud Is available to rent and to own on streaming services now.

Posted by GenreOnline.net at 8:21 PM No comments:

ZACK SNYDER’S JUSTICE LEAGUE Will Be Available Worldwide In All Markets March 18, Day And Date With The US

Posted by GenreOnline.net at 10:56 AM No comments: 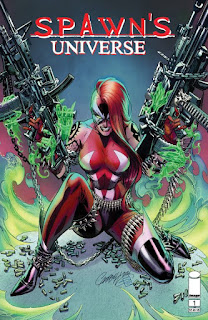 Posted by GenreOnline.net at 5:47 PM No comments: 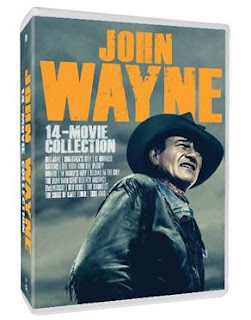 Relive some of the greatest performances by legendary actor John Wayne with the JOHN WAYNE ESSENTIAL 14-MOVIE COLLECTION, arriving on DVD May 11, 2021 from Paramount Home Entertainment.

An American hero and icon, Wayne had an epic, 50-year film career in which he played the lead in over 140 films.  He was nominated* for three Academy Awards®, winning the Best Actor award for his performance in True Grit.

Representing Paramount’s biggest John Wayne collection ever, this 14-movie set spans nearly 25 years of Wayne’s exceptional career and includes his only Oscar®-winning performance in True Gritand his final lead role in The Shootist.  Encompassing epic stories of integrity and dramatic battles of will, these fan-favorites capture the virtue, courage, and humor of an American original.

The films in the DVD collection are:

Posted by GenreOnline.net at 1:08 PM No comments: