Cecil B. DeMille's THE GREATEST SHOW ON EARTH debuts on Blu-ray March 30th 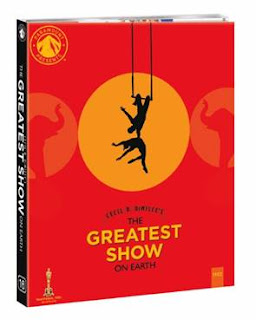 Legendary director Cecil B. DeMille’s grand spectacle THE GREATEST SHOW ON EARTH arrives for the first time on Blu-ray as part of the Paramount Presents line on March 30, 2021from Paramount Home Entertainment.

Newly restored from a 4K scan of the original negative, this essential movie of the Golden Age of Hollywood packs action, romance, laughs and treachery into an epic only DeMille could create, resulting in one of 1952’s biggest hits.

The limited-edition Paramount Presents Blu-ray Disc™ includes the newly restored film in collectible packaging with a foldout image of the film’s theatrical poster and an interior spread with key movie moments.  THE GREATEST SHOW ON EARTH Blu-ray also includes a new Filmmaker Focus with film historian Leonard Maltin, exploring the making of the film and its reception, as well as access to a Digital copy of the film.