I just finished The Stand. The last episode with a new Coda written by Stephen King was to me, the best episode of the nine part series. At the end the episode is a combination of the conclusion from the updated  book that was omitted from the original miniseries and something heroic for one of the characters to do that brings a sense of closure and yet brings things full circle too. Director Mick Garris, who helmed the original 1994 miniseries has a cameo here. I love his long white hair look he sports now. 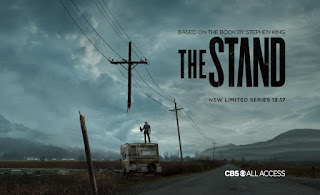 For me personally, I liked the 1994 original more, but I am glad somethings did not have to be reviewed twice. I also thought that miniseries still suffers from the fact that you’ll lose a lot in terms of character that Garris and King were able to bring out in less time than this new adaptation. I never felt I got to know.who the new characters were mostly because the actors can only work with so much based on what they are given in the script and I felt if you’re not familiar with the book or the original mini series, you are missing out on a lot. However if you read the book and/or saw the original miniseries you can look at this and sort of fill in the blanks. However something like this should stand on its own without being familiar with either the book or previous miniseries. No pun intended on my use of the word Stand in the preceding sentence..

Anyway I am still glad I saw it and will probably get it on Blu-ray to add to my Stephen King miniseries abd feature film adaptation collection. Don’t know when or if it’ll be coming out anytime soon, butt for what it was I like the original better than this one because some of the  choices that were  implemented  I simply disagreed with and feel some of the most important scenes were left out completely when they should have been included from my humble point of view. Overall The Stand (2020)  was OK, but it could have been so much better.

Posted by GenreOnline.net at 1:41 AM