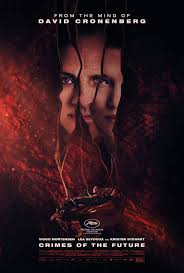 David Cronenberg has a film coming out called Crimes of the Future and in this dystopian drama, the human body is reacting to the environment by growing new organs rapidly like a cancer and you have the government trying to catalog and understand what is happening with the hope of controlling it while there are dissidents who want to accelerate it for survival sake after witnessing mutations like a child that can eat and digest plastic. At the center you have the microcosm of people fetishizing the mutations through gross performance art. At face value I thought it sounds like just another David Cronenberg film, but upon examining it further, it is sort of like a genuine environmental warning where the problem cannot be controlled by the powers that be, people trying to accelerate it are not certain if they are correct and then you have the masses who are in denial and treating it like the new “thing” and I thought to myself, strip away all of the outlandish elements and Crimes of the Future is Crimes of the Present.

Viggo Mortensen delivers a nuanced if not sympathetic performance of an artist who is afflicted with the syndrome and has turned it into a way to earn a living by having his partner (Lea Seydous) literally cut the mutations out of his body in front of a live audience while Kristen Stewart is a government agent sent to investigate the phenomenon only to become enamored with it and Mortensen’s character. Scott Speedman represents the other side with it’s own questionable intentions. Mortensen shares great screen chemistry with Lea Seydous while Stewart at times seems a little too starstruck to believably be taken seriously as a clandestine government agent though she is absolutely gorgeous in the film and certainly sells the idea of a young woman crossing the line from a professional with a job to do to later becoming a groupie.

Cronenberg and Mortensen work beautifully together as one of the great actor and auteur relationships of our time and Cronenberg manages to create a world where much is suggested, but little is seen save for the surgery scenes that may or may not prove too graphic for those unfamiliar with the Director’s style. Crimes of the Future is in competition at the Cannes Film Festival, but it will be opening in the United States distributed by Neon on June 2, 2022.

Posted by GenreOnline.net at 2:41 PM No comments:

NCIS: THE NINETEENTH SEASON arrives on DVD on August 16! 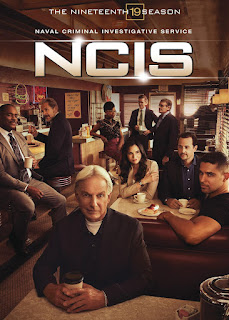 Description: The nineteenth season kicks off with a search for Gibbs (Harmon) after wreckage from his boat is discovered and he is nowhere to be found. After finding out about Gibb’s secret mission to track down a dangerous serial killer, Agent Jessica Knight (Kartina Law, “Hawaii Five-0”) steps in to help locate him. From murder and espionage to terrorism and stolen submarines, these special agents investigate all crimes with Navy or Marine Corps ties.

THE GILDED AGE: THE COMPLETE FIRST SEASON Get a Glimpse of Historical High Society When The DVD Arrives on July 26, 2022 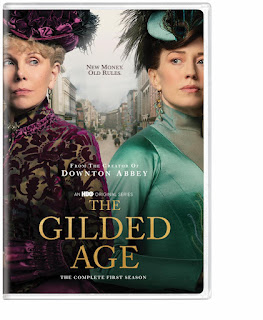 Get a Glimpse of Historical High Society When The

BURBANK, CA (May 24, 2022) Get ready to embark on a compelling journey through life in New York in the late 1800s, as Warner Bros. Home Entertainment brings The Gilded Age: The Complete First Season to DVD on July 26, 2022. Indulge in all 9 episodes from the first season of the historical drama that won fans over with its charming cast and compelling storylines with over two hours of bonus content including an all-new featurette. The Gilded Age: The Complete First Season is available to own on DVD for $24.98 SRP ($29.99 in Canada) and will also be available to own on Digital via purchase from all major digital retailers. The series is now available exclusively for streaming on HBO Max.

From Emmy® and Academy Award®Winning Writer Julian Fellowes (“Downton Abbey”, Best Original Screenplay Gosford Park), and recently renewed for a second season by HBO, The Gilded Age the Complete First Season takes place during a period of immense economic change, of huge fortunes made and lost, and the rise of disparity between old money and new.  A wide-eyed young scion of a conservative family, Marian, embarks on a mission to infiltrate the wealthy neighboring clan of her aunts Agnes van Rhijn and Ada Brook, dominated by ruthless railroad tycoon George Russell and his ambitious wife, Bertha, meeting new people like aspiring writer Peggy Scott, along the way. In this exciting new world that is on the brink of the modern age, will Marian follow the established rules of society, or forge her own path?

The Gilded Age is currently available to own on Digital. Digital purchase allows consumers to instantly stream and download to watch anywhere and anytime on their favorite devices. Digital movies and TV shows are available from various digital retailers including Prime Video, Apple TV, Google Play, Vudu and others.

Posted by GenreOnline.net at 5:32 PM No comments:

The Contractor Arrives On 4K, Blu-ray And DVD On June 7th 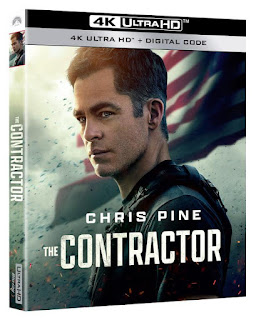 Synopsis:                            Chris Pine stars in the action-packed thriller as Special Forces Sergeant James Harper, who is involuntarily discharged from the Army and cut-off from his pension. In debt, out of options and desperate to provide for his family, Harper contracts with a private underground military force. When the very first assignment goes awry, the elite soldier finds himself hunted and on the run, caught in a dangerous conspiracy and fighting to stay alive long enough to get home and uncover the true motives of those who betrayed him. Also starring Kiefer Sutherland, Ben Foster, Gillian Jacobs and Eddie Marsan.

Posted by GenreOnline.net at 1:02 PM No comments: 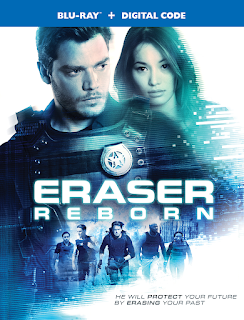 The all-new original film, ERASER: REBORN, a reboot of the 1996 blockbuster, follows US Marshal Mason Pollard, a specialist in engineering the fake deaths of witnesses that need to leave no trace of their existence. In this clip from the action-packed film, Mason Pollard (played by Dominic Sherwood) fakes the death of Rina Kimura (played by Jacky Lai), a crime boss’ wife who’s decided to turn states evidence.

U.S. Marshal Mason Pollard specializes in “erasing” people – faking the deaths of high-risk witnesses. With the technological advances of the last 25 years, the game has upgraded, and it’s just another day at the office when he’s assigned to Rina Kimura, a crime boss’ wife who’s decided to turn state’s evidence. As the two flee to Cape Town, South Africa, with a team of merciless assassins on their trail, Pollard discovers he’s been set up. Double-crossed and fueled by adrenaline, he needs to be at the top of his game, or he’ll be the one who’s erased. Permanently.

Posted by GenreOnline.net at 12:47 PM No comments: 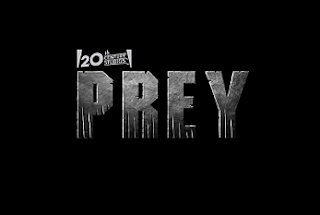 All-New Entry in the “Predator” Franchise Directed by

Dan Trachtenberg to Debut as a Hulu Original in the U.S.,

BURBANK, Calif. (May 16, 2022) — “Prey,” an all-new action-thriller from 20th Century Studios directed by Dan Trachtenberg (“The Boys,” “10 Cloverfield Lane”) and the newest entry in the “Predator” franchise, will stream August 5, 2022, exclusively on Disney’s direct-to-consumer platforms: as a Hulu Original in the U.S., a Star+ Original in Latin America, and a Star Original on Disney+ in all other territories.

Set in the Comanche Nation 300 years ago, “Prey” is the story of a young woman, Naru, a fierce and highly skilled warrior. She has been raised in the shadow of some of the most legendary hunters who roam the Great Plains, so when danger threatens her camp, she sets out to protect her people. The prey she stalks, and ultimately confronts, turns out to be a highly evolved alien predator with a technically advanced arsenal, resulting in a vicious and terrifying showdown between the two adversaries.

The filmmakers were committed to creating a film that provides an accurate portrayal of the Comanche and brings a level of authenticity that rings true to its Indigenous peoples. Myers, an acclaimed filmmaker, Sundance Fellow and member of the Comanche nation herself, is known for her attention and dedication to films surrounding the Comanche and Blackfeet nations and her passion for honoring the legacies of the Native communities. As a result, the film features a cast comprised almost entirely of Native and First Nation’s talent, including Amber Midthunder (“The Ice Road,” “Roswell, New Mexico”), newcomer Dakota Beavers, Stormee Kipp (“Sooyii”), Michelle Thrush (“The Journey Home”), Julian Black Antelope (“Tribal”).

Posted by GenreOnline.net at 6:14 AM No comments:

This year, Friday the 13th is your lucky day!

This year, Friday the 13th is your lucky day!

In celebration of its 40th anniversary in 2022, Friday the 13th Part 3 is now available in a Limited-Edition Blu-ray™ SteelBook®.  This killer edition includes the 2D version of the film, which was remastered in 2020 from original film elements, along with access to a digital copy of the film and a host of previously released bonus content.

In this installment, a new crop of campers plays a deadly game of cat-and-mouse with the maniacal Jason, who acquires what will become his iconic mask from an unlucky victim.

In addition, the original Friday the 13th comes to 4K Ultra HD on September 13, 2022, in time for Halloween viewing.  One of the most iconic horror films of all time, Friday the 13th launched the long-running and wildly popular franchise, which has grossed over $466 million worldwide.   The 4K Ultra HD release features HDR-10 and Dolby Vision® and includes both the theatrical and unrated versions of the film, access to a digital copy, and extensive legacy bonus content.

The thrills start when a new owner and several young counselors gather to reopen Camp Crystal Lake, despite locals’ warnings that the place has a “death curse.” One by one, they find out how unlucky Friday the 13th can be as they are stalked by a violent killer

Posted by GenreOnline.net at 1:33 PM No comments: