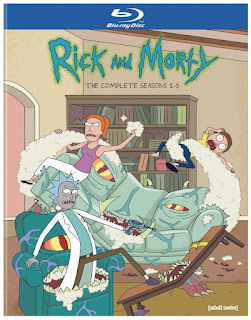 BURBANK, CA (January 24, 2021) From creators Justin Roiland (“Solar Opposites”) and Dan Harmon (“Community”), go on an intergalactic adventure across the multi-verse with the epic release of the Rick and Morty: Seasons 1-5 boxed set on Blu-ray™ and DVD from Warner Bros. Home Entertainment on March 29, 2022. Get Schwifty while you binge on one of cables #1 watched comedies - and follow the misadventures of America’s favorite crazy scientist and his grandchildren with this outrageous boxed set which includes all 51 episodes from the first five seasons of the award-winning series, along with copious special features, including audio commentary, deleted scenes, “Inside the Episode” segments, numerous featurettes, past animatic sketches, and more. For a limited time, fans who purchase the set will receive an exclusive poster from the series. Rick and Morty: Seasons 1-5 is priced to own at $89.99 SRP for the Blu-ray ($99.99 in Canada), which includes a Digital Copy (U.S. only) and $79.99 SRP for the DVD ($89.99 in Canada). Rick and Morty is also available to own on Digital via purchase from digital retailers.

With Blu-ray’s unsurpassed picture and sound, Rick and Morty: Season 1-5 Blu-ray release will include 1080p Full HD Video with DTS-HD Master Audio for English 5.1. Featuring all 51 episodes from seasons 1-5 in high definition, as well as a digital code of the seasons (available in the U.S. only).

Posted by GenreOnline.net at 10:49 AM No comments:

Hopefully a gift from the Valar. 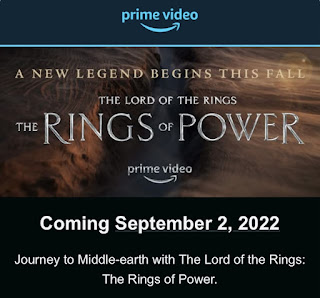 Posted by GenreOnline.net at 12:19 PM No comments: 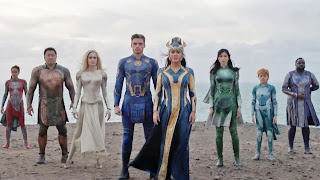 The Eternals is a part of the live action Phase Four of the Marvel Cinematic Universe that brings a deeper understanding into the more cosmic areas of the popular franchise. If Doctor Strange opened an esoteric side to the MCU and Antman took us into the Quantum Realm, The Eternals challenged viewers with a deep story that called into question the nature of God like beings and their system of creation and destruction in order to create more. It is rather philosophically gnostic in nature because it does ask questions about why things are the way they are and whether or not the plans of beings more powerful and perhaps alien than we could possibly understand, have the best interests of their creations at heart and without getting into spoilers, I would say conflicting actions toward the end of the story left the jury still out on this one.

I liked The Eternals more than I expected and the story, though not without it’s problems, is not nearly as incomprehensible as some reviewers would have one think. The problems that arise the most is that the characters tend to be flat and there are some missed opportunities in the script that really prevent the film from at least being Marvel’s true thinking person’s superhero or graphic novel inspired property.

The characterizations are flat because they depend too much on the talent playing the roles, but not much else. So for example if I identify with the characters of Sersi, Ikaris, Thena, Ajax and Kingo, it is not because their characters truly shine as individuals, but because I recognize the faces. This creates a disservice since if I had not Kumail Nanjani from his appearances on shows like Conan or Angelina Jolie because of her natural presence and notoriety, then I am not really invested in the characters beyond the familiarity of who is playing them. I am interested in them because I recognize the Actors and those who I do not recognize do not foster enough interest in them because the characters are only engaging because of who is playing them or otherwise I could not tell you who is who by their character’s name and if anything I should be able to get lost in the characters rather than only care because I am familiar with the talent. Kit Harrington’s character is little more than an extended cameo and he could have been cut out of the film all together and it would not make much of a difference as far as the film’s plot is concerned.

Director Chloe Zhao, who also participates in a retrospective and at times scene specific feature length audio filmmakers’ commentary seems unable to give the film the balance it needs to make it fit in more cohesively with the rest of the MCU instead of being sort of the odd one out.

English Closed Captions for the deaf and hearing impaired along with Spanish Language Subtitles are available as options on the Movies Anywhere digital copy that otherwise presents The Eternals with an impressive Dolby Vision 4K UHD widescreen aspect ratio with a deep and losses Dolby ATMOS Soundtrack. Two featurettes covering the comic book origins (10:46) and the cast (5:01) are provided along with four deleted scenes (6:06) that can be viewed individually or as one reel, a gag reel (2:29) and the trailer (2:50), which wraps up the extra value content. The interactive menus through Apple TV 4K are well rendered and easy to navigate.

The Eternals is available for purchase as a 4K Digital Copy through Movies Anywhere or other streaming digital platforms online.

Posted by GenreOnline.net at 11:53 AM No comments:

Attack on Titan Final Season Part 1 and Josee, the Tiger and the Fish Are Coming In February, 2022 From Funimatuon. 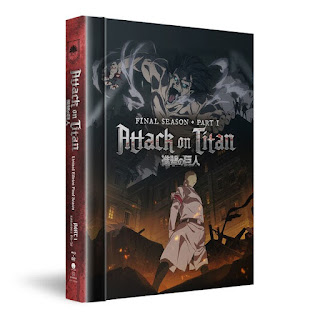 “ATTACK ON TITAN FINAL SEASON PART 1” AND “JOSEE, THE TIGER AND THE FISH” ARRIVE ON BLU-RAY AND DVD FROM FUNIMATION THIS FEBRUARY 2022

Additional February 2022 Home Video Highlights From Funimation Dr. STONE, My Hero Academia, Berserk, By the Grace of the Gods, And More!

Culver City, California (January 13, 2022) – Anime fans will fall in love with Funimation’s upcoming home video selections as the critically acclaimed Josee, the Tiger and the Fish releases on Blu-ray™ for the first time on February 8, 2022, while Limited and Standard Edition Blu-ray box sets for Attack on Titan Final Season Part 1 launch on February 22, 2022.

The Josee, the Tiger and the Fish Blu-ray combo pack will come exclusively paired with the CD soundtrack from the film along with in-depth behind-the-scenes featurettes. The Limited Edition Blu-ray box set for Attack on Titan Final Season Part 1 is loaded with an exclusive 32-page art digibook, exclusive enamel pins, and art cards on top of all the incredible special features.

The Scout Regiment have just discovered the existence of Marley, the nation determined to eradicate their people. Now with the dark history of the Titans uncovered, they plan to set out for the world beyond their walls. Will Paradis finally know freedom?

Josee, the Tiger and the Fish

With dreams of diving abroad, Tsuneo gets a job assisting Josee, whose art takes her far beyond her home. But when the tide turns against them, they push each other to places they never thought possible and inspire a love fit for a storybook.

Josee, the Tiger and the Fish Exclusive:

Josee, the Tiger and the Fish Special Features Includes:

Dr. STONE Season 1, My Hero Academia Season 4, Berserk The Complete Series, By the Grace of the Gods Season 1, and more will also be released on Blu-ray in February 2022 as well.

All titles mentioned are now available for pre-order.

Posted by GenreOnline.net at 2:50 PM No comments: