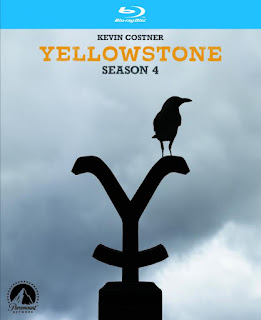 HOLLYWOOD, Calif. – Who shot John Dutton?  Fans can unravel the mystery and dig deeper into the rich history of the Dutton clan when “YELLOWSTONE” Season 4 arrives on Blu-ray and DVD March 8, 2022 from Paramount Home Entertainment.

From Paramount Network and 101 Studios, the Emmy®-nominated* “YELLOWSTONE” continues to be a massive hit, with the fourth season premiere drawing 14+ million viewers in the U.S. to become the most-watched season premiere on cable since “The Walking Dead” in 2017.  The show has also spawned a prequel series entitled “1883” starring Tim McGraw and Faith Hill, which premiered on Paramount+ in December.

The “YELLOWSTONE” Season 4 four-disc Blu-ray and five-disc DVD sets include all 10 hour-long episodes from the fourth season, plus over four hours of bonus content including making-of-featurettes, behind the scenes clips, never-before-seen interviews with cast and crew, and more.

Written and directed by Taylor Sheridan (Hell or High Water), ”YELLOWSTONE” is an engrossing family drama that follows the epic story of a multi-generational family that controls the largest contiguous ranch in the U.S.  In Season 4, the fates of Kayce, Beth, and John Dutton are unknown as Rip and the other wranglers wield their own brand of justice to take revenge and defend the Dutton legacy. Jacki Weaver, Piper Perabo and Kathryn Kelly join the cast in guest starring roles in the impressive ensemble that includes Oscar®-winner Kevin Costner, Luke Grimes, Kelly Reilly, Wes Bentley, Cole Hauser, Kelsey Asbille, Brecken Merrill, Jefferson White, Forrie Smith, Denim Richards, Ian Bohen, Finn Little, Ryan Bingham and Gil Birmingham with Will Patton.

Posted by GenreOnline.net at 7:16 PM