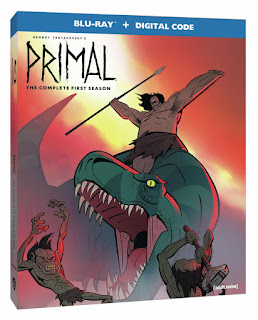 FOR IMMEDIATE RELEASE
“A piece of elemental storytelling that finds some real emotional depth without either of its protagonists uttering a single word of dialogue.” – IndieWire
Genndy Tartakovsky's Primal:
The Complete First Season
Available on Blu-ray & DVD June 1, 2021
BURBANK, CA (March 30, 2021) – Eat, or be eaten! Kill, or be killed! Get into survival mode with Adult Swim’s #1 prehistoric animated series with the release of Genndy Tartakovsky's Primal: The Complete First Season on Blu-ray and DVD from Warner Bros. Home Entertainment on June 1, 2021. The critically acclaimed series displays a perfect 100% rating by critics & 99% by audience on Rotten Tomatoes, and recently won 3 Juried Emmy® Awards for Outstanding Achievement in Animation. Travel back in time and binge on all 10 fascinating episodes from the first season and go behind the scenes with interviews from the incredible talent from this wordless series. The edge-of-your-seat thriller is priced to own at $24.98 SRP for the DVD ($30.99 in Canada) and $29.98 SRP for the Blu-ray ($39.99 in Canada), which includes a Digital Copy (U.S. only). Genndy Tartakovsky's Primal: The Complete First also available to own on Digital via purchase from digital retailers.
Coming off an award-winning final season of “Samurai Jack,” Adult Swim reunites with creator Genndy Tartakovsky on a new animated series. “Primal” features a caveman at the dawn of evolution. A dinosaur on the brink of extinction. Bonded by tragedy, this unlikely friendship becomes the only hope of survival in a violent, primordial world.
SPECIAL FEATURES
INCLUDES ALL 10 EPISODES
DIGITAL
Genndy Tartakovsky's Primal: The Complete First Season is available to own on Digital. Digital purchase allows consumers to instantly stream and download all episodes to watch anywhere and anytime on their favorite devices. Digital movies and TV shows are available from various digital retailers including Amazon Video, iTunes, Google Play, Vudu and others. A Digital Copy is also included with the purchase of specially marked Blu-ray discs for redemption and cloud storage.
BASICS
Blu-ray & DVD Release Date: June 1, 2021
Total Runtime: Approx. 220
Enhanced Content Runtime: Approx. 10 min
1 BD-50 / 2 DVD-9 Blu-ray Audio – English (5.1),
DVD Audio – English Blu-ray Subtitles – English SDH, Dutch
DVD Subtitles – English SDH
Rated: TV-MA
Blu-ray Price: $29.98 SRP ($39.99 in Canada)
DVD Price: $24.98 SRP ($30.99 in Canada)
Posted by GenreOnline.net at 2:01 PM No comments: 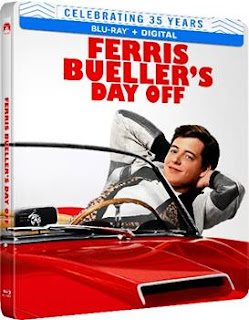 Posted by GenreOnline.net at 11:33 AM No comments: 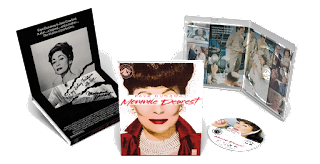 Posted by GenreOnline.net at 11:27 AM No comments:

HAPPILY arrives on DVD May 25th 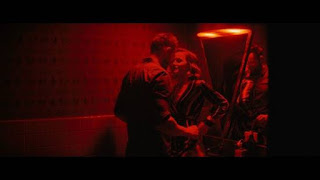 Release dates: Now In Select Theaters, On Digital & On Demand

Rating: R for sexual content, language throughout and brief violence

Synopsis: A ehappily married couple (Joel McHale and Kerry Bishé) discover their friends are resentful of their lustful relationship. When a visit from a mysterious stranger leads to a dead body, they begin to question the loyalty of their so-called friends.

Posted by GenreOnline.net at 1:12 PM No comments:

Arrow Keepd It Reel In April With Clipboard Jungle. 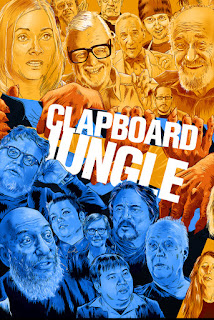 Navigating the current film business is more difficult than ever before. Rapidly changing technology and an overcrowded marketplace have led to an industry in which anyone can now make a film, but few can make a living.

Following five years in the life and career of independent filmmaker Justin McConnell (Lifechanger), this documentary explores the struggles of financing, attracting the right talent, working with practical effects and selling the finished product in the hope of turning a profit. Featuring interviews with a range of industry luminaries – including Guillermo del Toro (Crimson Peak), Sid Haig (Spider Baby), Barbara Crampton (Re-Animator), Mick Garris ("The Stand"), Dick Miller (Matinee), Tom Holland (Fright Night) and George A. Romero (The Crazies), alongside a host of others – not only are technical aspects and interpersonal skills discussed but also the emotional stamina and little-known tips needed to survive in the low budget film industry.
A warts-and-all exploration of what it takes to get a film made and released, Clapboard Jungle serves as a survival guide for the modern independent filmmaker and offers a fascinating insight into a side of the industry with which few are likely to be familiar.
Posted by GenreOnline.net at 1:07 PM No comments:

PIXIE arrives on DVD May 11th 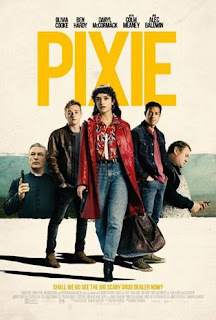 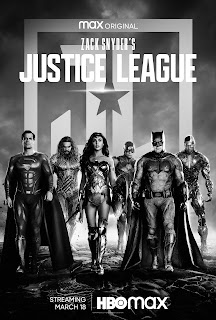 Posted by GenreOnline.net at 7:27 PM No comments: 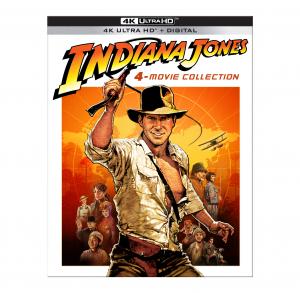 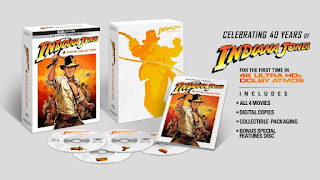 In addition, all four films were remixed at Skywalker Sound under the supervision of legendary sound designer Ben Burtt to create the Dolby Atmos®soundtracks.  All original sound elements were used to achieve the fully immersive Dolby Atmos® mixes while staying true to each film’s original creative intent.

Posted by GenreOnline.net at 2:26 PM No comments: 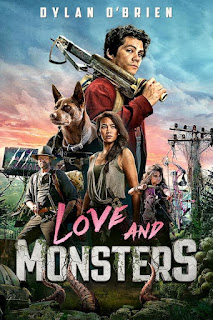 Posted by GenreOnline.net at 11:43 AM No comments: