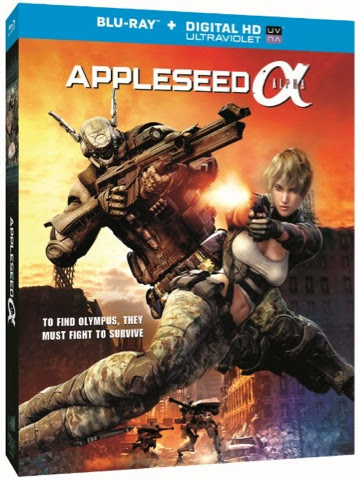 "The most visually stunning Appleseed movie yet"
– Zac Bertschy, Anime News Network
All-New, CG-Animated Sci-Fi Action Adventure Based on the Popular
“Appleseed” Franchise by the Creator of Ghost In The Shell

Get It Early on Digital July 15

CULVER CITY, Calif. (May 13, 2014) – Thepopular franchise “Appleseed” comes to new life in the CG-animated prequel APPLESEED ALPHA, available July 22 on Blu-ray™, DVD & Digital from Sony Pictures Home Entertainment.  World-renowned anime filmmaker Shinji Aramaki (Starship Troopers: Invasion) directs the latest installment in the sci-fi adventure franchise based on the original comic books by Shirow Masamune (“Ghost in the Shell”) published by Seishinsha with a screenplay by Marianne Krawczyk (God of Wargame series, Star Trek game and BAFTA Award winner for character and story on God of War 2game). APPLESEED ALPHA depicts the early days of female soldier Deunan and her cyborg partner, Briareos, as they embark on an action-packed journey in search of the legendary city of Olympus.

From the creator of Ghost in the Shell and the director of Appleseed comes the intense post-apocalyptic prequel, Appleseed: Alpha. Left to survive in a post-World War society, two mercenary soldiers - Deunan and her cyborg partner Briareos – are sent on a mission on the outskirts of their war-torn city. During the operation, they run into Iris and Olson, two citizens from the utopian city of Olympus, who might have a way to save the world but the ruthless Talos and the scheming warlord Two Horns have their own plans. It’s up to Deunan and Briareos to safeguard their newfound contacts and help save humanity’s last hope.

It has a run time of approximately 93 minutes and has been rated PG-13.