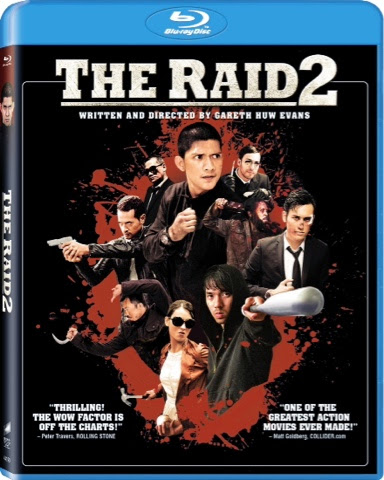 “Thrilling! The ‘WOW’ factor is off the charts!”
– Peter Travers, ROLLING STONE
“One of the greatest action movies ever made!”
– Matt Goldberg, COLLIDER.COM

With More than 90 Minutes of Behind-the-Scenes Featurettes

CULVER CITY, Calif. (May 19, 2014) –Director Gareth Huw Evans reunites with star Iko Uwais for the sequel to their cult hit with the acclaimed, action-packed martial arts epicTHE RAID 2, available on Blu-ray™, DVD and Digital HD July 8 from Sony Pictures Home Entertainment.  After fighting his way out of a building filled with gangsters and madmen, Rama (Uwais) thought he could return to his normal life. Instead, his success puts himself and his family in danger, forcing him to go undercover to bring down a nefarious and powerful criminal by befriending his son.THE RAID 2 also stars Yayan Ruhain, Arifin Putra, Oka Antara, Tio Pakusadewo, Julie Estelle, Ryuhei Matsuda, Kenichi Endo and Kazuki Kitamur.

The Blu-ray and DVD will include an English dub of the film as well as the original language version (Indonesian). The Blu-ray will also come loaded with extra content, allowing fans to immerse themselves in the making of the film, including more than 90 minutes of behind-the-scenes featurettes, as well as a deleted scene and filmmaker commentary. Gareth Huw Evans’ process of transitioning the story from the first film to the sequel is explored in the “The Next Chapter: Shooting a Sequel” featurette. In the “Cinefamily Foundation Q&A” featurette, Gareth Huw Evans, Iko Uwais and Joe Trapanese discuss the making the film. Exclusive to the Blu-ray is the “Gang War” deleted scene and two additional featurettes.  Fans can take an inside look at the elaborate fight choreography in “Violent Ballet: Behind the Choreography,” and “Ready for a Fight: On Location” features the cast and crew on the challenges of filming in Indonesia.

Immediately following the events of THE RAID, Rama (Iko Uwais) is forced to reinvent himself as an undercover cop in order to provide protection for his wife and child. Working for the anti-corruption taskforce led by the one person he can trust, Bunawar (Cok Simbara), he is given a mission to engage himself as an enforcer for a local mob boss, Bangun (Tio Pakusodewo). Finding a way in through Bangun's son Uco (Arifin Putra), Rama must hunt for information linking Bangun with police force corruption. All the while, he harbors a dangerous and personal vendetta for revenge and justice that threatens to consume him- and bring both this mission and the organized crime syndicates crashing down.

o   “Violent Ballet: Behind the Choreography”

o   “The Next Chapter: Shooting a Sequel”

THE RAID 2 has a run time of approximately 150 minutes and is rated R for sequences of strong bloody violence throughout, sexuality and language.