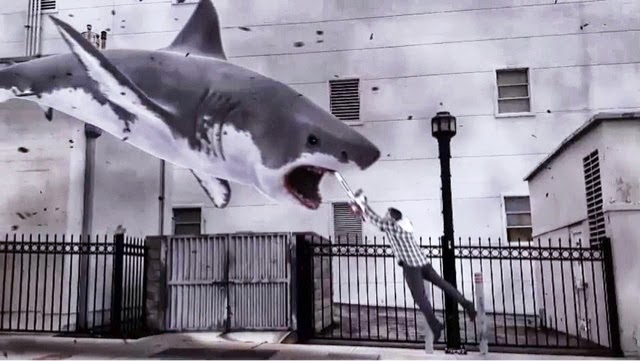 NEW YORK – May 27, 2014 – Sharks. Sharks. Everywhere – sharks! From the eagerly anticipated premiere of Sharknado 2: The Second One (July 30), Roger Corman’s Sharktopus vs. Pteracuda(August 2) and Mega Shark vs. Mecha Shark (July 26) to the greatest moments in shark film history, Syfy viewers will be swimming with fin-tastic special programming during the channel’s first everSharknado Week, airing Saturday, July 26 through Saturday, August 2.

Mega Shark vs. Mecha Shark – Saturday, July 26 at 9PM – When the U.S. government creates an exact robotic copy of the original mega shark, this new mecha shark runs wild – with only the original mega shark standing in the way of global destruction. A production of The Asylum, the movie stars Christopher Judge (Stargate SG1) and Elisabeth Rohm (American Hustle).

Sharknado 2: The Second One –Wednesday, July 30 at 9PM – InSharknado 2: The Second One, the sequel to last summer’s global pop culture sensation, a freak weather system turns its deadly fury on New York City, unleashing a Sharknado on the population and its most cherished iconic sites – and only Fin (Ian Ziering) and April (Tara Reid) can save the Big Apple. The movie, directed by Anthony C. Ferrante from a screenplay by Thunder Levin, also stars Mark McGrath, Kari Wuhrer, Vivica A. Fox and Judah Friedlander, with cameo appearances including Kelly Osbourne, Judd Hirsch, Perez Hilton, Matt Lauer, Al Roker, Andy Dick, Robert Klein, Sandra “Pepa” Denton, Biz Markie, Downtown Julie Brown, Richard Kind and Kurt Angle, among others. Sharknado 2: The Second One is a production of The Asylum.

Sharktopus vs. Pteracuda – Sunday, August 2 at 9PM – In this new Roger Corman movie, the child of Sharktopus goes toe-to-toe with the latest science experiment "Pteracuda" – half Pteradactyl, half Barracuda – in a battle for monster supremacy. A production of New Horizons Pictures, the movie stars Robert Carradine (Django Unchained) and Katie Savoy (Living with Models).