From the Frontlines of the Independent Cinema Revolutions 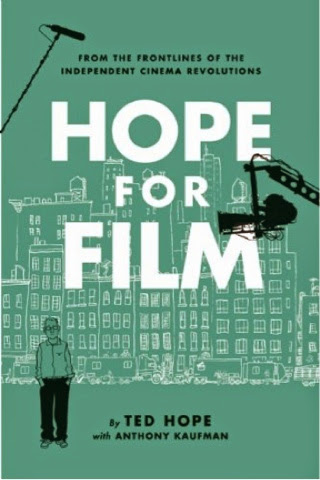 “I’m just one of many filmmakers who have benefitted from Ted’s resources, his skill and enthusiasm. In this book, Ted Hope draws on his own experience to show you how to make a movie you can afford, instead of wasting time in development; and more importantly, he teaches you how to use limited resources to maximize creativity and artistic freedom. There is nobody in the independent film world quite like Ted Hope. His wisdom and heart shine through every page."

“Ted Hope’s remarkable career makes for fascinating reading. He has lived in the center of independent filmmaking for almost three decades. His insight into the challenges and process of independent film offers any reader, whether you’re a film student or indie movie fan, a unique glimpse into how specialized films really get made, sold, and released.”

—Ed Burns, Director of She’s the One

An inspiring, tell-all look at the independent film business from one of the industry’s most passionate producers, Hope for Film: From the Frontlines of the Independent Cinema Revolutions (on sale: August 12, 2014) captures the rebellious punk spirit of the indie film boom in 1990s New York City, its collapse two decades later, and its current moment of technology-fueled regeneration. Ted Hope, whose films have garnered twelve Oscar nominations, draws from his own personal experiences working on the early films of Ang Lee, Eddie Burns, Alan Ball, Todd Field, Hal Hartley, Michel Gondry, Nicole Holofcener, Todd Solondz, and other mavericks, relating those decisions that brought him success as well as the occasional failure.

Whether navigating negotiations with Harvey Weinstein over final cuts or clashing with high-powered CAA agents over their clients, Hope offers behind-the-scenes stories from the wild and often heated world of low-budget cinema—where art and commerce collide. As mediator between these two opposing interests, Hope offers his unique perspective on how to make movies while keeping one’s integrity intact and how to create a sustainable business enterprise out of that art while staying true to one’s self. Against a backdrop of seismic changes in the independent film industry, from corporate co-option to the rise of social media, Hope for Film provides not only an entertaining and intimate ride through the ups and downs of the business of art house movies over the last 25 years but also hope for its future.

TED HOPE is a legendary film industry creator, curator, advocate and executive. As CEO of Fandor, he gets to indulge his passion for finding innovative ways to distribute a greater array of works, including classic, rare and foreign films. Hope has produced over 70 films in the last two decades, including Crouching Tiger, Hidden Dragon; The Savages; 21 Grams; In the Bedroom; and Happiness. He holds a record at Sundance: three of his 23 SFF entries (American Splendor, The Brothers McMullen, What Happened Was…) have won the Grand Jury Prize, more than any other producer. His films have also won/been nominated for numerous awards, including Oscars, BAFTAs and the Critics Prize at Cannes. Prior to Fandor, Hope was the Executive Director of the San Francisco Film Society, where he created the Artist to Entrepreneur (A2E) program. Hope posts regularly on his HopeForFilm blog. Hope for Film is his first book.

ANTHONY KAUFMAN is a highly respected film journalist who has covered independent cinema since 1997. He was one of the founding editors of Indiewire.com and continues to write about films and the film industry for a variety of publications, including Variety and The Village Voice. He has also been published in The New York Times, Los Angeles Times, Chicago Tribune, The Wall Street Journal, and Slate, among others.

Title: Hope For Film: From the Frontlines of the Independent Cinema Revolutions