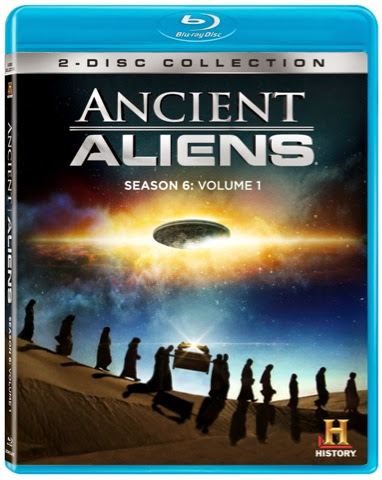 The bestselling, acclaimed HISTORY® series Ancient Aliens®: Season 6 - Volume 1returns with eight episodes of Season Six arriving on Blu-ray and DVD October 7 from Lionsgate Home Entertainment. Continue to explore the fascinating field of alien research with this year's top selling HISTORY® franchise on DVD. This two-disc collection will be available on Blu-ray and DVD for the suggested retail price of $19.99 and $19.98, respectively.

Ancient Aliens®: Season 6 - Volume 1 on H2® digs deeper into what role aliens may have played in shaping our world. Explore whether lost islands and mysterious, Eden-like paradises were actually earthly homes for aliens, and find out why the Greeks, Macedonians and other ancients believed the world's mountains to be sacred homes to all-powerful gods. Experience American history via rock carvings from an 8,000 B.C. man-made cave filled with ancient objects and mummies. Is there a link between this cave and the Native American legend of the "star beings"? From the "treasures of the gods" that may have been purposely hidden and protected by an extraterrestrial source, evidence of the famed "Ark of the Covenant" and even ancient celestial travel through "stargates" to tales of ancient life on Mars, there are worlds to explore in this special compilation.