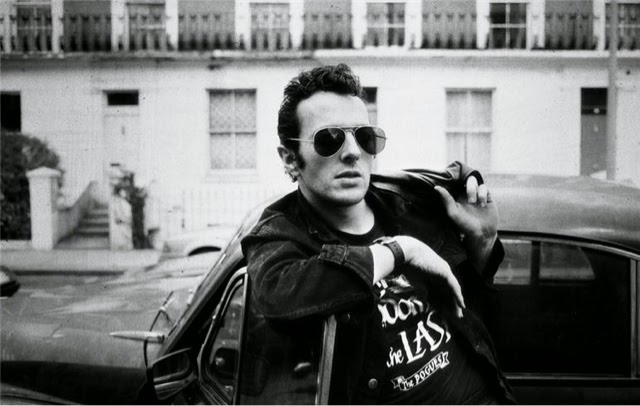 Grooving Years will be up at the MHG's Soho loft located at 116 Prince Street. The exhibit opens to the publicon September 19th.

The exhibit's title, Grooving Years, is a tribute to a note Joe Strummer once sent to Cheuse, that said: "Thanks for all the grooving years!" The sentiment is a direct window into how the music community at large views Cheuse and his work. Award-wining director, actor, composer, and screenwriter Jim Jarmusch (Dead Man, Night On Earth, Down By Law) says: "In the world of rockers, rappers, teds, toasters and graffiti masters, Josh Cheuse is primary Agent Provocateur. It's a gift to have these photographs and to see these moments through the eyes of this photographer." Cheuse's photography is reverent and unobtrusive, lending his images anthemic warmth. Cheuse says:"Everyone has a camera now, but not everyone is a photographer. It's not enough just to say you were there."

In addition to breathtaking images of the Clash, Joe Strummer, the Beastie Boys, and Madonna, the exhibit will features images of a diverse array of legendary musicians, including Oasis, Run DMC, Lady Gaga, Tony Bennett, Buddy Guy, and MGMT. As an Associate Design director at Sony Music Entertainment, Cheuse has a profound sense of visual flow and will curate the show with compelling narrative dynamics. The Grooving Years exhibit is also sure to bring forth a good party vibe, complete with a guest DJ, Cheuse's notable posse, and T-shirts and keepsake badges.

Josh Cheuse was born in New York City. His career began earnestly and accidently when, in 1981, he used the payphone at his high school to call The Clash at Electric Ladyland Studios and asked to photograph the band. That fateful moment eventually led to a myriad of opportunities: a full scholarship for photography to the School of Visual Arts in New York, a chance to hit the road with Big Audio Dynamite, and gigs shooting videos for Joe Strummer, and B.A.D. Soon, Cheuse began designing merchandise and sleeve artwork, and shooting video with an early portable Sony camera. His work with his friends the Beastie Boys and his work documenting of the hip-hop and reggae scenes have appeared in publications such as SPIN, Rolling Stone, Musician, and Time Out.

From 1993 until the present, Cheuse has been an art director at Sony Music, creating packaging and websites for artists including Bob Dylan, David Bowie, Miles Davis, Rod Stewart and Tony Bennett, while still finding time to go on the road to photograph his favorite groups like Oasis, and The Black Crowes. After his friend Joe Strummer's untimely death in 2002, Cheuse directed a poignant video tribute for Joe's version of "Redemption Song." In 2007, Cheuse's first book of photography, Rockers Galore was published by Stussy Books, along with a line of T-shirts using images from the book. His work has been featured at the Who Shot Rock photography exhibit at The Brooklyn Museum, and in exhibits in Tokyo, Paris, and Moscow. This July Cheuse's work as compiled by Mike D of The Beastie Boys will be featured in Monster Children magazine issue #43. Cheuse currently lives across the river In Jersey City, NJ with his wife, actress Cara Seymour, their son Minalu and cats Riff and Pearl
Posted by GenreOnline.net at 4:56 PM