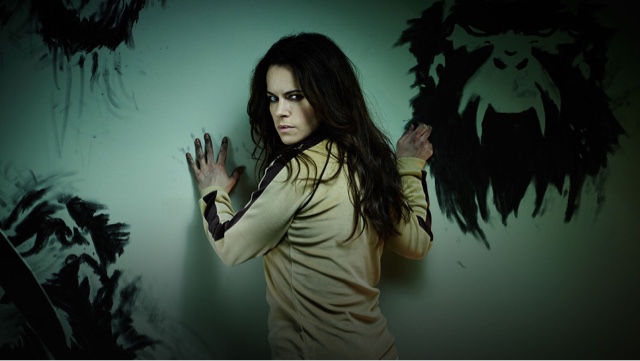 In addition, it was announced today that Barbara Sukowa (Dr. Jones), Todd Stashwick (Deacon) and Emily Hampshire (Jennifer Goines) will also return, now appearing as series regulars. Sukowa’s Dr. Jones is a renowned physicist who, in an unapologetic quest to stop the plague, creates the time machine and recruits Cole to send him back into the past. Stashwick’s Deacon is the cunning and brutal leader of a deadly band of scavengers in 2043 called the West 7. And Hampshire’s Jennifer Goines is a brilliant and unpredictable mental patient with potential ties to the 12 Monkeys' conspiracy to destroy the world with a deadly virus.

Michael Hogan (Battlestar Galactica) will also join the series as a guest star for a four episode arc, playing Dr. Vance Eckland, a charismatic and intelligent scientist from the future. He’s a comrade of Dr. Jones’ working alongside her at the temporal facility -- who reveals that they may have a closer relationship than first meets the eye.

Barbara Sukowa has starred in films including Alexanderplatz, Lola and Die bleierne Zeit and Rosa Luxemburg. She is a three-time Best Actress winner at the Bavarian Film Award for her roles in In the Name of Innocence, Vision – From the life of Hildegard von Bingen and Hannah Ahrendt. Sukowa is represented by Katja Szigat at Players Agentur Management GmbH.

Todd Stashwick is known for his role as Dale in FX’s The Riches. He has had recurring roles in Fox’s Gotham, The CW’s Originals, MTV’s Teen Wolf, HBO’s Weeds and FX’s Justified. He will soon be seen in the film Jane Got a Gun opposite Natalie Portman and Ewan McGregor.Stashwick is represented by APA, Meghan Schumacher Management and Melissa Rogal at Lichter, Grossman, Nichols, Adler & Feldman.

Hampshire has starred in Cosmopolis, My Awkward Sexual Adventure, The Returned, That Burning Feeling and All the Wrong Reasons. She also appears in the CBC and Pop series Schitt’s Creek alongside Eugene Levy and Catherine O’Hara. Hampshire is represented in the US by managers David Guillod and Brad Pence at Intellectual Artists Management and in Canada by agents Dani De Lio at Creative Drive Artists and Karen Benzakein at K.L. Benzakein Talent.

12 Monkeys explores the provocative story of Cole, a time traveler from a decimated future in a high-stakes race against the clock. Utilizing a dangerous and untested method of time travel, hejourneys from 2043 to the present day on a mission to locate and eradicate the source of a deadly plague that will all but annihilate the human race.

Posted by GenreOnline.net at 1:10 PM