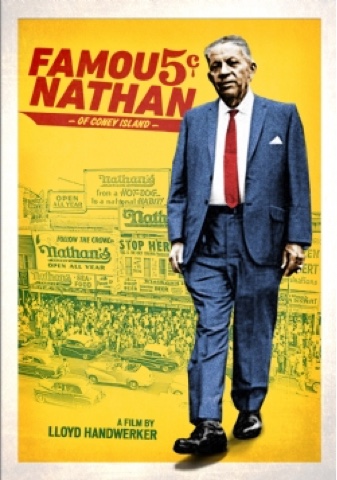 “Terrific documentaries are a dime a dozen; ones this multifaceted are to be cherished.” – The Village Voice

July 22, 2015 (New York, NY) – Film Movement (www.filmmovement.com), the New York-based distributor of independent films, is pleased to announce that FAMOUS NATHAN, the critically acclaimed award-winning documentary, premieres On Demand August 4th in advance of its DVD release on September 29th. Additionally, AND THEY CALL IT SUMMER, a tale of passion and degradation that forces protagonists (and viewers) to contemplate their concept of love, comes to On Demand platforms August 11th.

On the heels of a successful New York City theatrical run, FAMOUS NATHAN is the insider documentary by Lloyd Handwerker, grandson of Nathan Handwerker, who founded the legendary Brooklyn eatery and iconic New York institution, Nathan’s Famous, in Coney Island in 1916. Over a thirty-year period, Lloyd has filmed, archived and researched the story of both his grandfather and the family-run business. The film contains never-before-heard audio recordings of Nathan describing his upbringing in a poor village in Poland, emigration to New York, and details of creating and running Nathan’s for over forty years. Featuring interviews with extended family, friends and the employees who helped make Nathan’s the prototype for fast-food made with quality, love and care, it is also a story of labor and a chronicle of the people who spent their lives in the employ of Nathan’s. Their devotion to serving millions of customers in the hustle-bustle, nano-second speed, day-in and day-out grind of the restaurant is clear. Rich in nostalgia, FAMOUS NATHAN pushes the boundaries of conventional documentary filmmaking, as kaleidoscopic and layered as Coney Island itself, capturing the honky-tonk, in-your-face spirit that was Nathan’s Famous in its heyday and today.

AND THEY CALL IT SUMMER, a film by Paolo Franchi, tells the emotional story of an unconventional relationship, full of passion and perversion, between a man with a tormented psyche and the woman who tries to ease his pain. The film screened at the Rome, Fribourg International, and Moscow Film Festivals. The film is available on Video On Demand and digital platforms on August 11th.

Holdover on-demand programming in August includes AMOUR FOU, Jessica Hausner’s critically-acclaimed Cannes drama based on the double suicide of German romantic poet Heinrich von Kleist and Henrietta Vogel; THE LESSON, a stunning existential crime drama about a school teacher whose morality is turned upside down when she takes drastic measures to stop the foreclosure of her home; THE CHAMBERMAID, the German story of a shy hotel maid, Lynn, who lives vicariously through her guests, until Chiara, a dominatrix with a bold streak, manages to draw her out of her shell; and MARIE’S STORY, the inspiring, award-winning historical biopic about young Marie Heurtin, born deaf and blind and thought to be unreachable until she is cared for by a young nun who connects with her.

A full list of August films available On Demand from Film Movement follows:

New to On Demand this Month:

AND THEY CALL IT SUMMER – premieres August 11th View Trailer

Emotional scars keep Dino from having sex with Anna so he satisfies his urges with prostitutes, while seeking out Anna's ex-lovers to please her. Mired in a labyrinth of perversion, Anna tries to ease Dino's pain.

THE CHAMBERMAID by Ingo Haeb – through September 30th View Trailer