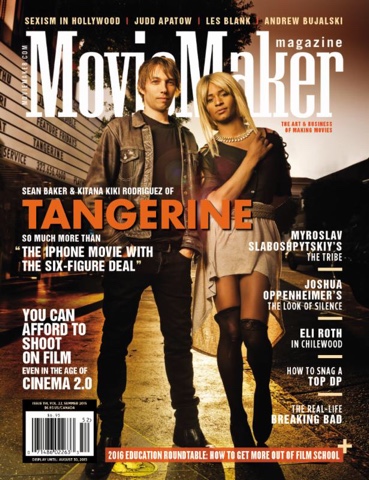 On the cover: Director Sean Baker and actor Kitana Kiki Rodriguez of Tangerine. In "Independence Transcendent" (pg. 56) by MovieMaker's deputy editor Kelly Leow, Baker's cast and crew share the fascinating story behind the making of their scrappy, uproarious indie feature: from acquiring Duplass Brother endorsement, discovering the Moondog Labs lens adapter and FiLMiC Pro app that enabled shooting on the iPhone 5s, and casting unknowns off the streets of West Hollywood, to premiering at Sundance to critical acclaim and a Magnolia distribution deal. Cover and interior photographs of Baker, Rodriguez and Tangerine co-star Mya Taylor were shot in Hollywood, California and Houston, Texas in May 2015 by Dominic Arizona Bonuccelli. (Read the full story on moviemaker.com here.)

Other stories in the issue include:

Now in its 22nd year and publishing five issues annually, MovieMaker is a progressive mix of in-depth interviews and criticism, combined with practical techniques and advice on financing, distribution and production strategies. The magazine's core readership is independent filmmakers, film students, festival-goers and film aficionados. MovieMaker's next issue, to be released in September, is the Fall 2015 issue, featuring the annual "25 Coolest Film Festivals in the World" article, as well as a special section on Horror Moviemaking. The issue will be distributed at the Toronto International Film Festival and other venues.
Facebook: https://www.facebook.com/MovieMakerMag
Twitter: https://twitter.com/moviemakermag
Instagram: https://instagram.com/moviemakermag/
Google+: https://plus.google.com/+MoviemakerMagazine
Posted by GenreOnline.net at 4:36 PM