YOU CAN'T TAKE IT WITH YOU Debuting for the First Time on Blu-ray Dec. 8 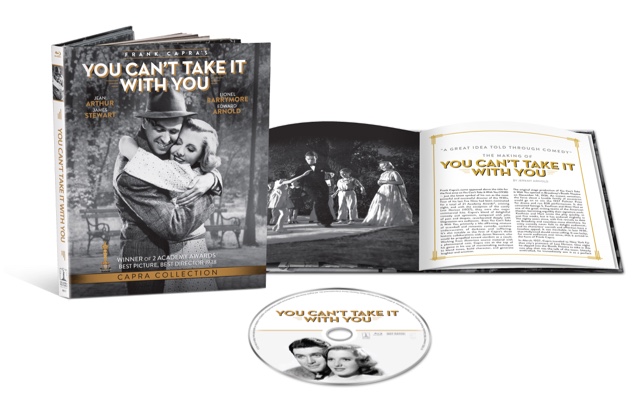 YOU CAN’T TAKE IT WITH YOU

Debuting for the First Time on Blu-ray™ Dec. 8

With an All-New Essay by Film Historian Jeremy Arnold

Bonus Content Includes Commentary by Frank Capra Jr. & the Featurette “Frank Capra, Jr. Remembers … You Can't Take It With You”

CULVER CITY, Calif. (Sept. 22, 2015) – A true classic and a whimsical gem from the Columbia Pictures library, Frank Capra’s acclaimed screwball comedy YOU CAN'T TAKE IT WITH YOU makes its Blu-ray™debut Dec. 8 from Sony Pictures Home Entertainment. The Blu-ray, digitally restored and mastered in 4K, will be presented in a 24-page collectible Digibook packaging, featuring rare photos and an all-new essay by celebrated film historian Jeremy Arnold.  One of the most successful films of 1938, YOU CAN'T TAKE IT WITH YOU was nominated for seven Academy Awards®[1], taking home statuettes for Best Picture and Best Director. Based on the hit Kaufman-Hart play, the story follows a man (James Stewart) from a family of wealthy snobs who becomes engaged to a woman (Jean Arthur) from a good-natured but decidedly eccentric family.

Bonus content includes commentary by Frank Capra Jr. and Author Cathrine Kellison., the original theatrical trailer, and the featurette “Frank Capra Jr. Remembers ... You Can’t Take It With You,” in which the son of the famous director offers insight on his father’s technique, the motivation of the actors and the production of the film.

YOU CAN’T TAKE IT WITH YOU is the second release in SPHE’s ongoing Capra Collection series, which launched last year with Mr. Smith Goes to Washington.

Academy Award® winner James Stewart (Best Actor, The Philadelphia Story, 1940), Jean Arthur, Academy Award® winner Lionel Barrymore (Best Actor, A Free Soul, 1931) and Edward Arnold star in this classic screwball comedy. Arthur stars as Alice Sycamore, the stable family member of an offbeat clan of free spirits who falls for Stewart, the down-to-earth son of a snooty, wealthy family. Amidst a backdrop of confusion, the two very different families rediscover the simple joys of life. Based on the phenomenally successful Kaufman-Hart play, YOU CAN'T TAKE IT WITH YOUwas directed by Frank Capra and won two Academy Awards® (1938 Best Picture, Best Director). Now fully restored in 4K, this heartwarming and timeless classic is perfect for every family.

§  “Frank Capra, Jr. Remembers … You Can't Take It With You” Featurette

YOU CAN'T TAKE IT WITH YOU has a running time of 126 minutes and is not rated.

Posted by GenreOnline.net at 2:31 PM