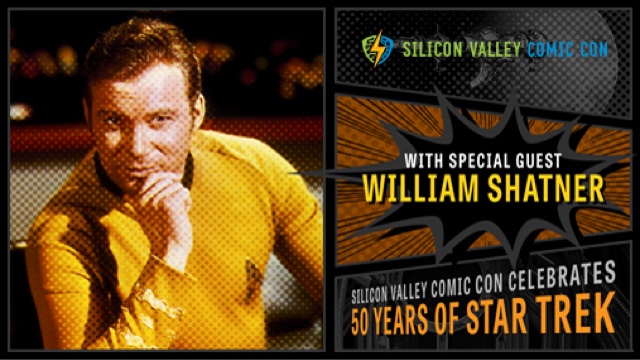 Boldly Going Where No One Has Gone Before:
William Shatner to Host Star Trek 50th Anniversary Celebration At Inaugural Silicon Valley Comic Con
Tickets Now Available for Purchase
San Jose, Calif. – Sept. 21, 2015 – The original Captain Kirk, William Shatner, has set coordinates for Silicon Valley Comic Con (SVCC), Steve Wozniak’s pop culture and technology expo debuting in March 2016. Tickets are now on sale for the inaugural event, which has added a Friday night opening due to overwhelming interest and support. SVCC will bring top celebrities, film, TV, independent artists, comic books, cosplay, video games, music and technology to the San Jose Convention Center the weekend of March 18-20, 2016.
As the first official details for SVCC to be revealed, William Shatner will host a special 50th anniversary celebration for Star Trek alongside other stars from the acclaimed TV and film series. More information about the celebration and the rest of the special events for SVCC will be released later this fall.
“It’s only logical to celebrate the 50th anniversary of ‘Star Trek’ alongside technology that was just science fiction when ‘Star Trek’ first began to broadcast,” said William Shatner. “I’m looking forward to participating in the inaugural Silicon Valley Comic Con.”
“Not only did ‘Star Trek’ captivate a legion of science fiction lovers, it also inspired generations of engineers, scientists, directors, writers and artists,” said Wozniak. “Just like ‘Star Trek,’ Silicon Valley Comic Con will bridge the gap between entertainment and technology. We have many more events and surprises planned, so fans should grab their tickets now to join all the fun.”
Silicon Valley Comic Con tickets can now be purchased at www.svcomiccon.com/tickets and the official event hotels are now offering special SVCC rates to attendees. There are a variety of ticket and VIP package options for everyone:

With the Woz at the helm, and with help from his many friends, Silicon Valley Comic Con will unite America’s two greatest superheroes: pop culture and technology. Hosted at the San Jose Convention Center, SVCC will feature Hollywood celebrities and technology leaders from movies, TV, and music, as well as consumer electronics, apps, gaming and emerging innovations. Different genres and artists in comics, cosplay, science fiction, fantasy, anime and more will be in the spotlight, while panels, talks, autograph sessions, photo ops, and many more events will give fans a chance to enjoy special experiences with their favorite celebrities and content.

Posted by GenreOnline.net at 1:56 PM