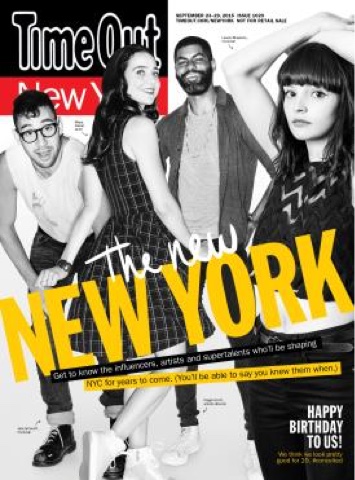 [New York, NY] September 22, 2015: This week, Time Out New York celebrates its 20th year as the premier source of inspiration for New Yorkers seeking to make the most of their city. In its multiplatform coverage of the best that NYC has to offer, the publication has often spotlighted celebrities and notable locals and builds on this tradition for the 20th anniversary issue, which hits the streets September 23, 2015. The issue reveals the “New New York” list, recognizing the notable New Yorkers who will be shaping the city’s culture and the entertainment industry for years to come. The list of 12 spans established names and up-and-comers, including musicians, actors, artists, writers and more, with a series of featured interviews, plus expanded web-only content.

“As the consistent arbiters of culture in New York for the past 20 years, we’re excited to look back on the city we love so much while looking forward to what’s to come,” says Carla Sosenko, Editor of Time Out New York. “In honoring the past 20 years, we felt it was an opportunity to gaze ahead, in Time Out spirit, to recognize the next wave of star personalities of the city. This group of New York artists and influencers represents everything New York—and Time Out New York—is about: They are shaping culture, pushing boundaries and enriching this amazing city we’re all lucky enough to call home.”

Time Out New York launched as a free, weekly publication in April this year, part of a wider growth strategy which has seen the brand taking a new approach to print distribution, more than doubling circulation to 305,000. As a result, Time Out has greatly expanded its millennial reach and is now delivering new, cross-platform creative opportunities for national partners and local advertisers. Complementing the free print edition, the Time Out New Yorkwebsite and mobile apps continue to offer distinctive digital content that both locals and visitors turn to every day for information and inspiration.