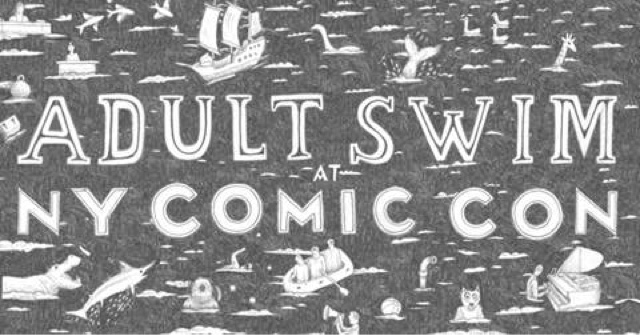 Adult Swim, basic cable’s #1 network in total day with adults 18-24, 18-34, and 18-49, is once again taking their show talent on the road for this year’s New York Comic Con, offering up unique experiences for fans with special events, revealing panels and free signings for top-rated shows including The Venture Bros. and Robot Chicken. These fan favorites will be joined by the upcoming comedy mini-series Neon Joe, Werewolf Hunter. Adult Swim stars on hand will include Seth Green, Breckin Meyer, Matthew Senreich, Jackson Publick, Doc Hammer, Jon Glaser, Stephanie March, Scott Adsit, and many more.

Adult Swim and KFC® will host an exclusive fan event at Brooklyn Bowl on Thursday, October 8th to celebrate the launch of Robot Chicken Season 8 and the world premiere of Robot Chicken DC Comics Special III: Magical Friendship. The two companies will also debut the third and final custom video in “The Colonel’s Chronicles,” the epic space adventure starring Colonel Sanders and the Robot Chicken that was created by Stoopid Buddy Stoodios. Series co-creators Seth Green and Matthew Senreich will be on hand to greet fans, enjoy some free bowling and celebrate the start of New York Comic Con. KFC®will cater the evening, providing food and drink tickets, as well as free t-shirts to those in attendance while supplies last. Fans 21 years or older can RSVP for the free event atAdultSwimPresents.com.

Back for another float, Adult Swim will also host a nighttime fan party along the Hudson River on Saturday, October 10th as part of New York Comic Con “Super Week”. The Adult Swim Tyrannic Second Maiden Voyage will take lucky fans for a three-hour cruise featuring a night of NYC views & city sights, an up-close look at Lady Liberty, a live performance by a secret musical guest, and the company of Adult Swim friends and family. Boarding time is 8:00 p.m. with a 9:00 p.m.departure. Free for fans 21 years or older, potential passengers can RSVP on AdultSwimPresents.com.

See the full lineup below and please note all times, dates and locations are subject to change. Visit AdultSwimPresents.com for more details and updates.

The Venture Bros. co-creators Jackson Publickand Doc Hammer will take the stage to show an exclusive look at the upcoming sixth season of their original series and discuss the state of all things Venture in this post – “All That and Gargantua-2” world. Join us for a Venture Bros.signing, 12:15 p.m. - 1:15 p.m. on Saturday, October 10th, Table 26 at the NYCC Autographing Area.

Creator and star Jon Glaser (Girls, Parks and Recreation), and cast members Scott Adsit (30 Rock), Stephanie March (Law & Order: SVU), Steve Little (Eastbound and Down) & Steve Cirbus (Delocated) invite you for a first look at the upcoming mini-series, premiering this December on Adult Swim. Set in the sleepy town of Garrity, VT (aka "B&B Town, USA!"), Neon Joe, Werewolf Hunter is the story of a neon-clad man with a mysterious past and a highly specialized skill set – hunting werewolves. Moderated by John Hodgman (The Daily Show).  Everyone attending the panel will receive a limited-edition Neon Joe, Werewolf Hunter comic produced by DC Entertainment, explaining Neon Joe’s origin.  Free comics will also be available at the signing.

Join Robot Chicken co-creators Seth Green and Matthew Senreich for an early look at season eight and the world premiere of Robot Chicken DC Comics Special III: Magical Friendship. You’ll also be treated to an evening of free bowling, prizes, a DJ set by The Rub, and good company.The first guests to arrive will receive two drink tickets each, while supplies last.

Free when you RSVP at AdultSwimPresents.com | 21+ | First-come first-served

Arriving early is recommended due to limited space

Join us for a three hour cruise along the Hudson, featuring a night of New York views & city sights, an up close look at Lady Liberty, a live performance from a secret musical guest, and the company of your Adult Swim Friends & Family.