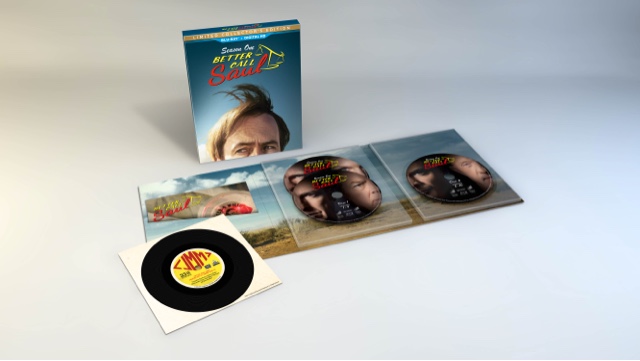 One of the Biggest Series Premieres in Cable History

The Blu-ray™ and DVD include cast & crew commentaries on every episode, a gag reel, music video, an inside look at the exhilarating first day of production and Creating the First Season where Co-Creators Vince Gilligan, Peter Gould as well as the cast and crew discuss the pressures of doing a prequel to Breaking Bad.  Exclusive to the Blu-ray™ is In Conversation: Bob Odenkirk & Michael McKean, a candid discussion between the two comedy legends about their careers, acting influences, and the challenges of grounding the McGill brothers’ complicated relationship. The Blu-ray™ also features Good Cop, Bad Cop:  Becoming Mike which chronicles the production of the much talked about episode "Five-O" and Jonathan Banks’ portrayal of Mike, a cast & crew table read for the episode "Uno", a hilarious in character commentary with Craig & Betsy Kettleman, Bob Odenkirk outtake footage with introductions by Peter Gould and Director Michelle MacLaren; deleted scenes with commentary by Gilligan, Gould and Thomas Schnauz and In the Studio,a look at the creation of the Junior Brown song, “Better Call Saul.”

Before Saul Goodman met Walter White, he was struggling attorney Jimmy McGill (Bob Odenkirk).  In this prequel to the Emmy®-winning series Breaking Bad, Jimmy teams up with “fixer” Mike Ehrmantraut (Jonathan Banks) and begins his transformation from optimistic underdog into Albuquerque’s most notorious legal legend.

·         All the special features included on the Blu-ray™ noted below

Blu-ray™ and DVD Special Features include:

·         Jimmy in the Courtroom with Introduction by “Mijo” Director Michelle MacLaren