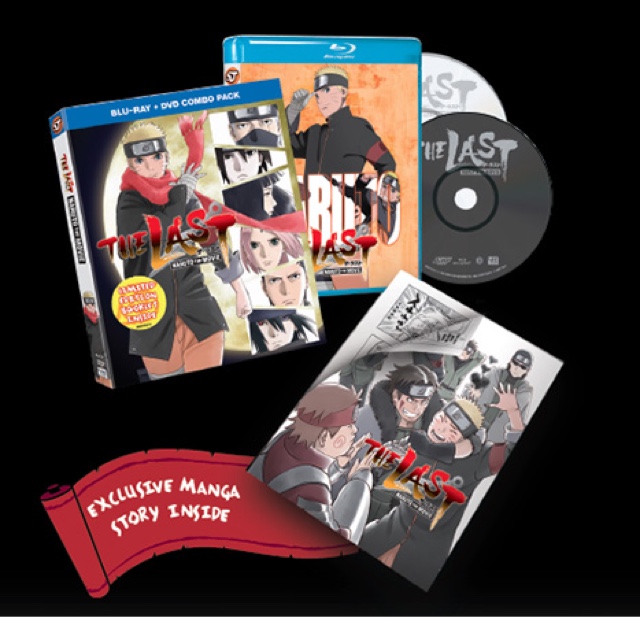 San Francisco, CA, September 25, 2015 – VIZ Media, LLC (VIZ Media), the largest distributor and licensor of manga and anime in North America, delivers the knockout ninja action of the seventh anime feature film in the NARUTO SHIPPUDEN saga with the home media release of THE LAST: NARUTO THE MOVIE on October 6th.

The DVD Standard Edition release carries an MSRP of $19.98 U.S. / $24.98 CAN and presents the film with high quality 16x9 video along with available dubbed English 5.1 and 2.0 audio selections and original Japanese dialogue options. Bonus features include the original theatrical trailers and commercial and promotional videos for the movie.

THE LAST is the final story of Naruto as you knew him, the hero who was once an outcast, and the first chapter of the bond that will define his future. Two years have passed since the fated battle between Naruto and Sasuke in the Village Hidden in the Leaves. A comfortable peace has fallen over the village and the winter festival approaches with a bit more excitement than usual. Seasons of war have transformed Naruto and his friends into elite young warriors, but now they grow into the adults they were meant to be, forming bonds beyond friendship.

In the film, Naruto and Hinata approach this next stage with trepidation and find their progress stalled when a mysterious and dangerous man appears with a disturbing message; the end of the world is upon them. Once again Naruto and his friends are sent to investigate and stop the impossible: a falling moon! What is the tragic fate that connects this disaster with Hinata's Hyuga Clan? And to what lengths will Naruto go to speak the words that will change his life?

Additional information on NARUTO and NARUTO SHIPPUDEN is available at www.Naruto.com.