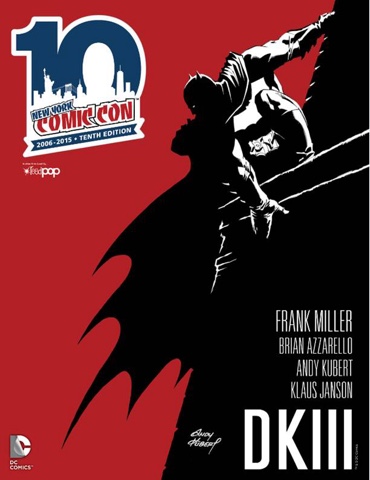 ReedPOP today revealed the exclusive cover for this year’s program guide, created by DC and designed by Andy Kubert. The cover (image below) is a sneak peek at Issue #1 of DARK KNIGHT III: THE MASTER RACE that comes out later this year.

In conjunction with the cover reveal, DC will also be doing the following panel at this year’s NYCC to celebrate The Dark Knight’s 30th Anniversary:

Frank Miller’s THE DARK KNIGHT RETURNS is one of the most important and recognized works in comic book history. In recognition of its 30thAnniversary, DC Entertainment returns to New York to celebrate the book that defined a generation. Joining in the festivities will be the amazing cast of top-notch talent, including Brian Azzarello, Klaus Janson, Andy Kubert, Jim Lee and maybe even a surprise guest or two, who are working on the final chapter of the saga 30 years in the making. Be here for reveals, revelations and exclusive artwork!  This is the once-in-a-lifetime panel you CANNOT miss!

DC joins another fantastic lineup at this year’s show – filled with comic book, TV, gaming, and more. I thought you would be interested in sharing this image and DC’s plans for the Dark Knight.

Posted by GenreOnline.net at 12:04 PM