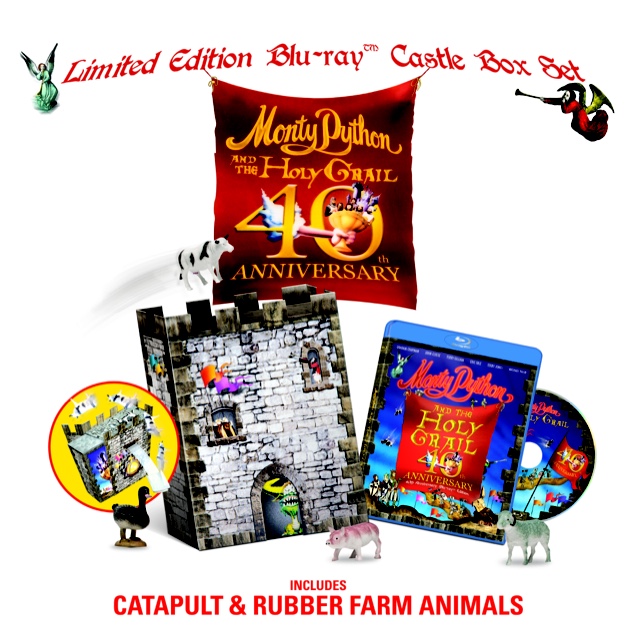 A Comedy Classic Celebrates a Historic Milestone on Blu-ray™Oct. 27

MONTY PYTHON AND THE HOLY GRAIL:

CULVER CITY, Calif. (August 17, 2015) –Sony Pictures Home Entertainment celebrates the 20th Century’s most brilliant and outrageous comedy troupe and their essential comedy classic with the MONTY PYTHON AND THE HOLY GRAIL: 40thANNIVERSARY EDITION, available as a Limited Edition Gift Set and in standardBlu-ray™ packaging on Oct. 27.  Both editions of the comic masterpiece include all-new artwork from Terry Gilliam and the all-new 30-minute “Monty Python and the Holy Grail at the 2015 Tribeca Film Festival,” a Q&A with Terry Gilliam, Terry Jones, Michael Palin, John Cleese and Eric Idle, hosted by John Oliver and recorded live at the Beacon Theatre in New York City.

The 40th anniversary celebration of Monty Python and the Holy Grail will also be extended to US theaters via Rainbow Releasing for the rest of this anniversary year with exciting new features for the big screen experience to be announced shortly.

Once in a lifetime, there comes a motion picture that changes the whole history of motion pictures. A picture so stunning in its effect, so vast in its impact that it profoundly affects the lives of those who see it.  MONTY PYTHON AND THE HOLY GRAIL might well be that motion picture. In celebration of its 40th Anniversary milestone, immerse yourself in an experience with extras such as an all-new Q&A featuring the (remaining) Pythons, hours of slightly older special features, and a 40-year old movie presented in stunning high definition.

§  Outtakes and Extended Scenes with Introduction by Terry Jones

§  Lego Knights: The Knights of the Round Table in LEGO

§  How To Use Your Coconuts (An Educational Film)

MONTY PYTHON AND THE HOLY GRAIL: 40th ANNIVERSARY EDITION has a run time of approximately 92 minutes and is rated PG.