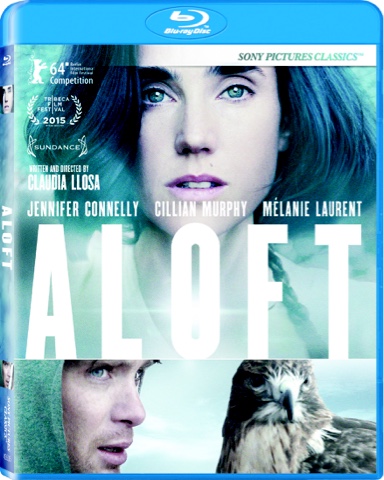 CULVER CITY, Calif. (August 17, 2015) – Sony Pictures Classics’ ALOFT will arrive on Blu-ray™, DVD and Digital HD September 29 from Sony Pictures Home Entertainment. Directed by Peruvian-born and Academy Award® nominated Claudia Llosa (The Milk of Sorrow), this spiritual film stars Academy Award® winner Jennifer Connelly (A Beautiful Mind, Best Actress in a Supporting Role, 2002), Cillian Murphy (Inception) and Mélanie Laurent (Now You See Me). ALOFT is a mystical new-age drama that follows the lives of three wounded characters; a mother, her son, and a hopeful stranger, all wrestling with the meaning of life and transcendence.

A film festival favorite, ALOFT screened at the Berlin International Film Festival in 2014, earning a nomination for the highest prize Golden Bear Award, and the Sundance and Tribeca Film Festivals earlier this year. The film captures the role super-natural belief and healing play in the lives of many people. Set in the immense, raw beauty of the Arctic north, Claudia Llosa toggles between the past and present to weave an otherworldly tale of grief, meaning and understanding.

As we follow a mother (Jennifer Connelly) and her son (Cillian Murphy), we delve into a past marred by an accident that tears them apart. She will become a renowned artist and healer, and he will come into his own as a peculiar falconer who bears the marks of abandonment. In the present, a young journalist (Mélanie Laurent) will bring about an encounter between the two that puts the very meaning of life and art into question, so that we may contemplate the possibility of living life to its fullest, despite the uncertainties littering our paths.