The Lady in the Van arrives on Blu-ray, DVD and Digital HD April 19th 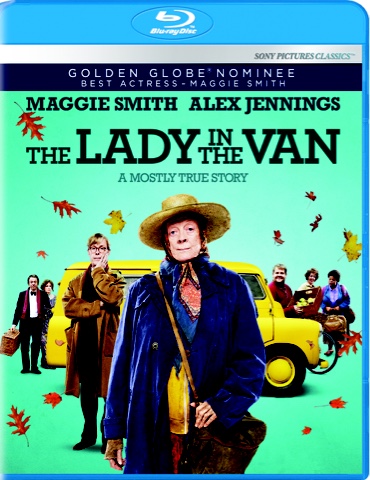 “A bizarre and fascinating true story. A total delight so rare in movies today.

THE LADY IN THE VAN

Rolling in April 19 with Special Features including a Star Profile,

CULVER CITY, Calif. (March 7, 2016) – THE LADY IN THE VAN, the British comedy-drama based on Alan Bennett’s memoir about an eccentric elderly woman who “temporarily” parks her van in Mr. Bennett’s driveway and proceeds to live there for 15 years, arrives on Blu-ray™, DVD & Digital HD April 19 from Sony Pictures Home Entertainment. This critically acclaimed Sony Pictures Classics film features the magnificent Maggie Smith (TV’s “Downton Abbey”), whose portrayal of Miss Mary Shepherd earned her a Golden Globe® nomination for Best Actress in a Motion Picture. Alex Jennings (Babel) heads the ensemble cast, along with James Corden (TV’s “The Late Late Show with James Corden”), Dominic Cooper (My Week with Marilyn), and Jim Broadbent (Brooklyn).THE LADY IN THE VAN was written by Oscar®-nominated playwright Alan Bennett (The Madness of King George) and directed by BAFTA and five-time Tony®-winning director Nicholas Hytner (The History Boys). The Blu-ray, DVD & Digital releases of THE LADY IN THE VAN will include a Maggie Smith profile, making-of featurette, deleted scenes, visual effects piece and more.

THE LADY IN THE VAN had its worldwide premiere at the 2015 Toronto International Film Festival as a Special Presentation. Smith first portrayed Miss Shepherd in 1999’s West End play of the same name (directed by Hytner), as well as in the 2009 BBC Radio 4 adaptation. Maggie Smith’s two Academy Award® wins were Best Actress in a Leading Role for The Prime of Miss Jean Brodie (1970) and Best Actress in a Supporting Role for California Suite (1979).

Based on the true story of Miss Shepherd (played by a magnificent Maggie Smith), a woman of uncertain origins “temporarily” parks her van in Alan Bennett’s (Alex Jennings) London driveway and proceeds to live there for 15 years. What begins as a begrudged favor becomes a relationship that will change both their lives. Acclaimed director Nicholas Hytner reunites with iconic writer Alan Bennett to create this rare and touching portrait.

The film has a runtime of 104 minutes & is rated PG-13 for a brief unsettling image.

“Academy Award®” and Oscar®-are the registered trademarks of the Academy of Motion Picture Arts and Sciences.