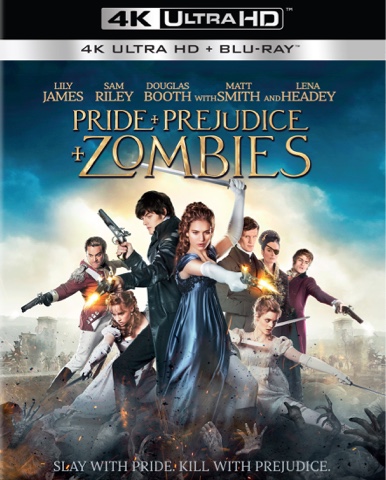 Debuting on Digital May 10

Bonus content on the PRIDE + PREJUDICE + ZOMBIES Blu-ray, DVD and digital formats includes the featurettes “Courtship, Class and Carnage: Meet the Cast” and “From Austen to Zombies: Adapting a Classic.” Exclusive content on the Blu-ray and digital editions include deleted scenes, a gag reel and a Mr. Collins Line-o-rama, which features Mr. Collins’ most memorable moments. Also included are the featurettes “The Badass Bennet Sisters,” which goes behind the scenes as the ladies prepare for battle; and “Creating the Unmentionables,” where the design teams explain how they created the 19th Century zombies.

A zombie outbreak has fallen upon the land in this reimagining of Jane Austen’s classic tale of the tangled relationships between lovers from different social classes in 19th century England. Feisty heroine Elizabeth Bennet (Lily James) is a master of martial arts and weaponry and the handsome Mr. Darcy (Sam Riley) is a fierce zombie killer, yet the epitome of upper class prejudice. As the zombie outbreak intensifies, they must swallow their pride and join forces on the blood-soaked battlefield in order to conquer the undead once and for all.

PRIDE + PREJUDICE + ZOMBIES has a run time of approximately 107 minutes and is rated PG-13 for zombie violence and action, and brief suggestive material.