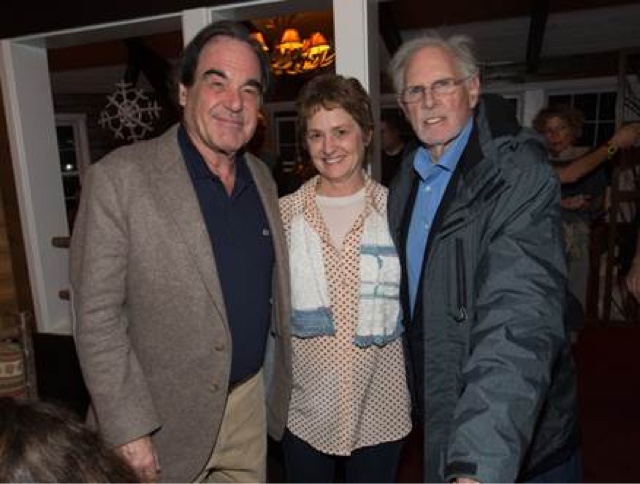 Sun Valley, ID….The 5th annual Sun Valley Film Festival (SVFF), presented by Zions Bank, wrapped up a successful, high-energy festival with an intimate Saturday night dinner for SVFF Lifetime Vision Award recipient Oliver Stone, and a lively awards party hosted by comic Seth Herzog. Music by The Joy Formidable entertained the crowd as the winners, filmmakers and movie lovers celebrated into the night. The Festival concluded Sunday with a Coffee Talk by filmmaker Oliver Stone and encore screenings of some of the Festival’s most popular films.

“It was another big hit,” said SVFF executive director Teddy Grennan.  “We couldn’t be more pleased with the continued growth of the festival. We sold out of our Festival, Party and Film Passes on the eve of the Festival, and had sold out films, panels and shows. We had close to 150 filmmakers and other special guests here, including some of the top legends in the industry. The feedback has been incredibly positive from both the filmmakers and the audiences. People really appreciate our focus on quality and accessibility with our unique film selections and opportunities to hear from renowned industry veterans.”

The Festival’s Lifetime Vision Award was presented to Academy Award®-winning director Oliver Stone, in honor of his long, remarkable, award-winning career as a visionary filmmaker. Upon receiving the award Stone remarked, “It has been a truly beautiful experience being here, it’s a special spot in the world, a bit of a Shangri La.  I have met so many young filmmakers, and it has been inspiring because they care, and are fighting. I fear though that the clouds are darkening again in the world, the danger is growing so I really, really pray for peace.”

Vision Award: The Vision Award recognizes a producer’s ability to keep a dramatic, feature length film in focus during the journey of the project.

The Audience Award: Voted on by movie goers.

Hot Shot Award: The Future Filmmakers Forum presents the Hot Shot Award to the best film by a student filmmaker under 18 years old along with a $1000 cash prize, sponsored by the Marshall Frankel Foundation. The award was presented by actor Jack Falahee.

WINNER: Dora Schoenberg, The Story of Three rings: A Memoir of Dana Schwartz

Nat Geo WILD TO INSPIRE: The 3rd Annual WILD to INSPIRE prize receives an opportunity to study filmmaking and wildlife in the Maasai Steppe landscape in Tanzania, Africa with Emmy Award winning cinematographer, Bob Poole. This competition is a result of a unique SVFF partnership with Nat Geo WILD.

WINNER: To the Explorers, by Alex Goetz & Justin Grubb

High Scribe: The SVFF Screenwriters Lab High Scribe competition gives finalists an opportunity for one-on-one meetings with some of the industry’s finest to discuss their work; the winner receives mentoring from an experienced professional. The lab host was actor-writer-director Mark Duplass and judge was Academy Award® winning screenwriter Nat Faxon.

One Potato Winner: The One Potato short screenplay competition awards the screenwriter a $5000 stipend to go towards shooting their film in Idaho.

Eva Konstantopoulous, There Is No Arthur

The Film Lab: Tito’s Handmade Vodka presented The Film Lab, hosted by Trevor Groth, the Director of Programming for Sundance Film Festival. Two Work-In-Progress films duked it out for $5000 in finishing funds, and both received the unique experience of a ‘soft launch’ as they work to finalize their film.

SVFF LIFETIME VISION AWARD: The SVFF Lifetime Vision Award pays tribute to an individual who has provided the keen insight, influence, and initiative to fulfill a creative vision.

PIONEER AWARD:   The new SVFF Pioneer Award honors an individual whose career choices are reflective of a true trailblazer.

HARRIMAN AWARD:  The Harriman Award is presented to an individual whose diverse body of work embodies the innovative spirit of Sun Valley’s founder, Averell Harriman.

Other signature Festival programs that were jam-packed with locals and out-of-town guests from across the country, included:

Content featured a lively discussion on how social media is changing the digital game with panelists Caitlyn Roper from WIRED, Jennifer Prince from Twitter, Derek Dressler from Vimeo and Jesse Patron-Werdiger from A24.

And venerable actor Bruce Dern held a Q&A following the Hollywood Heritagescreening of his role in the 1972 film classic, The King of Marvin Gardens.