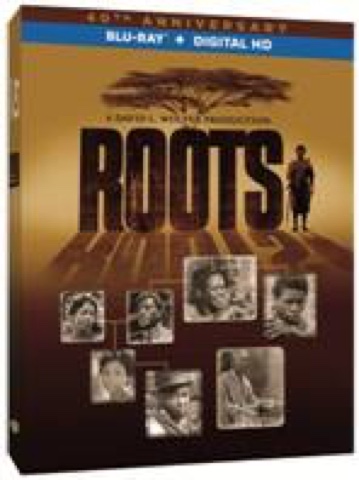 WILL BE RELEASED ON BLU-RAY™

IN ITS ORIGINAL EIGHT PARTS FOR THE FIRST TIME BY

Release is Loaded with Bonus Content Including Two Never-Before-Seen,

BURBANK, CA (March 1, 2016) -- The groundbreaking, acclaimed television miniseries that captivated the entire nation and won multiple awards, Roots, will be released on Blu-ray™ for the first time, by Warner Bros. Home Entertainment (WBHE) on June 7, 2016. The legendary family saga, which follows the inspiring story of Kunta Kinte (LeVar Burton, Transformers: Rescue Bots, Star Trek: The Next Generation) a West African teen who is captured and sold into slavery, has been beautifully remastered in eye-catching 1080p high definition from its original eight 1977 broadcast masters. Roots’ original broadcast was watched by an estimated 140 million viewers total, more than half of the US population and was the largest viewership ever attracted by any television series at the time. This release marks the powerful, Emmy®, Golden Globe® and Peabody Award-winning series’ 40th anniversary. Titled Roots: The Complete Original Series, this release will retail for $44.98 SRP.

Roots: The Complete Original Serieswill also be available to own in Digital HD for the very first time via purchase from digital retailers on May 16th, 2016. Consumers can enjoy the classic original series and all new HD special features before the premiere broadcast of the remake of Roots airs on cable television.

Adapted from author, Alex Haley’s best-selling, Pulitzer Prize-winning novel,Roots: The Complete Original Serieschronicles the expansion of Haley’s own family across many generations. The eight-part series follows the legacy of Kunta Kinte, (portrayed by Burton, who earned a Primetime Emmy® Award nomination for his role), a young, 18th century African warrior who is brought to the United States and sold into slavery. The saga follows the generations of his descendants in the United States through the Civil War and beyond, and shows the heartbreaking struggles they face trying to survive slavery and attain their freedom.

“Roots had a profound impact on television audiences when it first aired forty years ago.  Today, Alex Haley’s inspiring and important story continues to touch and affect viewers deeply.  It’s one of the most powerful miniseries in TV history,” said Rosemary Markson, WBHE Senior Vice President, TV Marketing. She added, “We are pleased to release this exceptional program on Blu-ray and Digital HD. In this new, digitally remastered format, Roots will continue to appeal to new generations for years to come.”

·         Roots: The American Story Continues (New Featurette) – Whoopi Goldberg, James Earl Jones, Blair Underwood, Debbie Allen, Tavis Smiley, Shonda Rhimes and Reverend Al Sharpton reveal how Rootsimpacted their lives and the thinking of the world. Dr. Rex Ellis of the Smithsonian Institution shares with us how the story chronicled by Alex Haley in Rootslives on in Washington’s new Museum of African American History and Culture; and Christopher Haley recalls his uncle Alex, whose legacy he continues as a slavery historian.

·         Crossing Over: How Roots Captivated an Entire Nation(Featurette)

Posted by GenreOnline.net at 1:50 PM