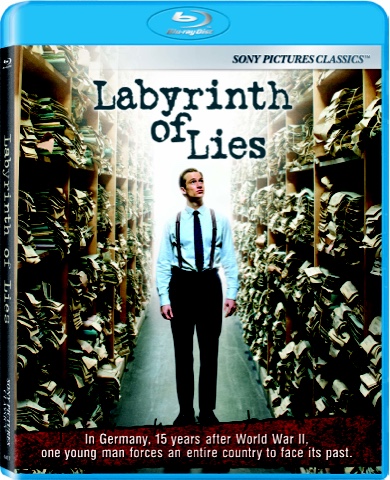 CULVER CITY, Calif. (December 21, 2015) – Sony Pictures Home Entertainment is pleased to announce the Blu-ray™, DVD and Digital release of LABYRINTH OF LIES on February 16. Germany’s Academy Award® entry for Best Foreign Language Film, LABYRINTH OF LIES is Giulio Ricciarelli’s feature film debut as director.  The script, which Ricciarelli co-wrote with Elisabeth Bartel, illuminates a relatively obscure chapter of German history, when thousands of former Nazis simply returned to their everyday lives and their crimes remained unpunished and largely forgotten. This Sony Pictures Classics film, which had its world premiere at the 2014 Toronto Film Festival, stars Alexander Fehling (Inglorious Bastards, TV’s Homeland) and features the last film performance by legendary German actor Gert Voss. Blu-ray and DVD special features on LABYRINTH OF LIES include a commentary track with Ricciarelli and Fehling, an interview with Ricciarelli and Fehling at the Jewish Film Festival and deleted scenes.

Germany 1958. In those years, "Auschwitz" was a word that some people had never heard of, and others wanted to forget as quickly as possible. Against the will of his immediate superior, young prosecutor Johann Radmann (Alexander Fehling) begins to examine the case of a recently identified teacher who was a former Auschwitz guard. Radmann soon lands in a web of repression and denial, but also of idealization.  He devotes himself with utmost commitment to his new task and is resolved to find out what really happened. He oversteps boundaries, falls out with friends, colleagues and allies, and is sucked deeper and deeper into a labyrinth of lies and guilt in his search for the truth. But what he ultimately brings to light will change the country forever.