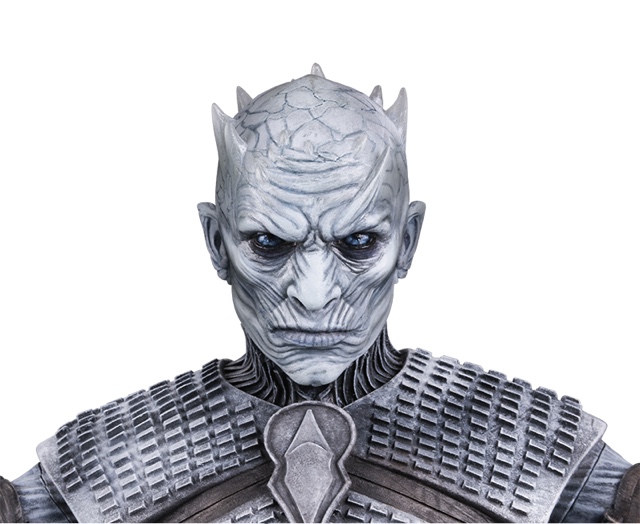 OR IMMEDIATE RELEASE: MILWAUKIE, OR—Dark Horse is heading into the holidays with the reveal of the latest release in its growing line of figures and collectibles based on characters from the smash-hit HBO® series Game of Thrones®. Modeled after the leader of the White Walkers who raised the fallen wildlings in the aftermath of the massacre at Hardhome in one of Season 5’s most shocking moments, the Night’s King bust will be available in spring 2016.

Drawing on the skills of sculptor Dave Cortes, Dark Horse has captured the Night’s King in full detail. The bust measures 8 3/4 inches tall. His 12-inch arms are raised as if he is a conductor orchestrating a crescendo, while his otherworldly blue eyes challenge Jon Snow and the Night’s Watch army as they retreat.

“Demand for our previous large-scale Game of Thrones statues and busts has been tremendous,” said Dark Horse Product Development head David Scroggy. “Items like our 14-inch Iron Throne replica, the Jon Snow and Ghost statue, and the Daenerys and Drogon bust have sold through quickly. We expect the Night’s King bust to be just as popular!”

This limited edition bust is sure to be the centerpiece of any Game of Thrones collection.

The Night’s King bust will be packaged in a full-color, oversize collector box. The release date is set for April 2016. Suggested retail price is $129.99.