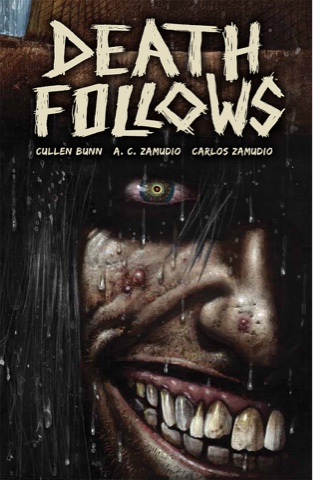 Originally debuting digitally through Monkeybrain as The Remains, Death Follows is horrifically and beautifully realized by A. C. Zamudio and Carlos Nicolas Zamudio. The print collection contains the original prose story by Cullen Bunn and a new cover by Simon Bisley.

“Death Follows is the darkest story I’ve written. It’s a supernatural horror tale set in rural North Carolina, the story of a mysterious farmhand who shows up at a struggling farm looking for work—and brings a nightmarish cycle of events with him,” remarked Bunn. “It starts with a simple (if somewhat strange) line: ‘The dead rats danced the day the hired man came around.’”

Birdie, her sister, their pregnant mother, and their frail father all live together on a struggling farm. When an itinerant farmhand named Cole comes to their aid, the children should be relieved. Instead, they find their lives spiraling into nightmare, as Cole regards Birdie’s sister with menacing desire. To make matters much worse, wherever he goes, the dead grow restless. As the horror threatens to consume her home and her family, Birdie is haunted by a chilling warning: Some secrets are meant only for the dead.

“The mystery and dread build to a horrific conclusion. It’s the stuff of nightmares, to be sure. I think readers of Harrow County will absolutely love this book,” added Bunn.

Death Follows is in stores May 25, 2016. Preorder your copy today at your local comic shopor through these fine retailers:

“Bunn has crafted a simple tale of horror around a questionable love of rodents to create a chilling tale of lost innocence and threatening strangers.”—Bloody Disgusting

“Bunn has proven that he is more than capable at telling scary stories.”—All-Comic

“The last time a comic made the hair stand up on the back of my neck like this was Locke & Key, and that’s saying something.”—Comicosity 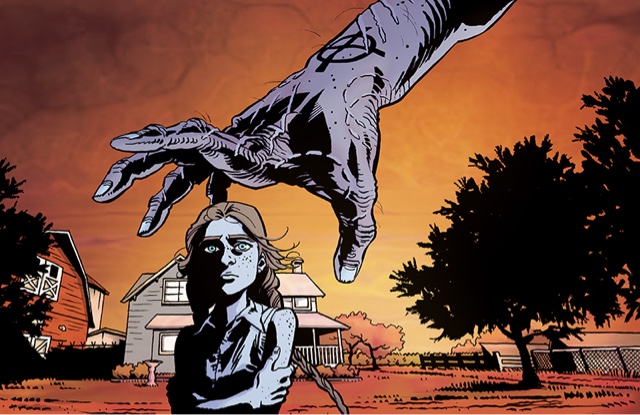