Cate Blanchett and Robert Redford Star in the Newsroom Drama that Nearly Changed the Course of a U.S. Presidential Election TRUTH 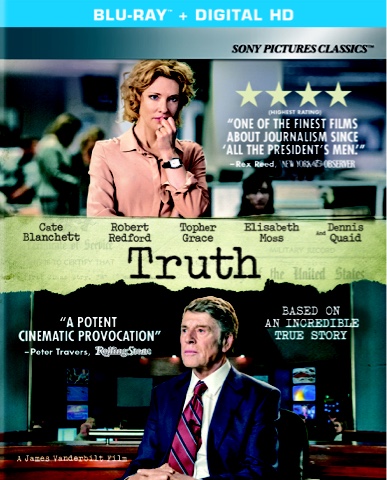 Cate Blanchett and Robert Redford Star in the Newsroom Drama
that Nearly Changed the Course of a U.S. Presidential Election

CULVER CITY, Calif. (Dec. 21, 2015) – Experience an incredible true story that rocked the world of television journalism when TRUTH premieres on Digital Jan. 26and Blu-ray™ and DVD Feb. 2 from Sony Pictures Home Entertainment. Directed and written by James Vanderbilt (writer Zodiac, The Amazing Spider-Man 2), TRUTH is based on award-winning TV producer Mary Mapes’ memoir, Truth and Duty: The Press, the President, and the Privilege of Power, which chronicles the story of Dan Rather (Robert Redford) and Mary Mapes’ (Cate Blanchett) investigation into a sitting President’s military service. But when doubts arise, sources change their stories and accusations fly, their story becomes one of network news’ biggest scandals.

The TRUTH bonus features further illuminate the events and issues that sent shockwaves through the journalistic community. Exclusive to the Blu-ray are deleted scenes and a featurette, “The Reason for Being,” with Dan Rather, Mary Mapes, Robert Redford and Cate Blanchett discussing the real events upon which the story was based and the important questions the film raises about journalism, political influence and the meaning of truth. Included on both the Blu-ray and DVD is a special featurette, “The Team,” where the A-list cast and filmmakers discuss the journey of bringing the film to the screen; a Q&A with Cate Blanchett, Elisabeth Moss and James Vanderbilt; and a Commentary with James Vanderbilt and producers Brad Fischer and William Sherak.

SYNOPSIS
Robert Redford and Cate Blanchett star in TRUTH, based on a riveting true story of one of network news’ biggest scandals. As a renowned producer and close associate of Dan Rather (Redford), Mary Mapes (Blanchett) believes she’s broken the biggest story of the 2004 election: revelations of a sitting U.S. President’s military service. But then allegations come pouring in, sources change their stories, document authenticity is questioned, and the casualties begin to mount. This dramatic thriller goes behind the scenes to expose the intricacies of journalistic integrity and what it takes to reveal the TRUTH.

Posted by GenreOnline.net at 5:29 PM