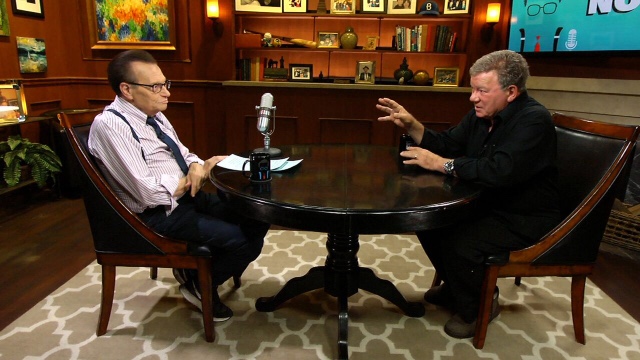 Hollywood icon William Shatner sits down with Larry King on the multi-Emmy nominated series “Larry King Now,” where he reflects on the success of "Star Trek," 50 years after its television debut, his friendship with the late and great Leonard Nimoy, and facing his own mortality. Plus, the original Captain Kirk discusses his charity, benefitting children and veterans.

The original Captain Kirk, William Shatner, opens up to Larry King about his friendship with his “Star Trek" co-star, Leonard Nimoy, and why they drifted apart before Nimoy recently passed away. He explains, “At the very end, something happened and I don’t know what it is. I have no idea. I don’t know what it is, but he stopped talking to me. I’d like to ascribe it to the fact that his illness got worse and worse so gradually but I don’t know. So my vision of it is I ignored that and maintained my love for him, which I had for many years.” (Clip link below)

“Star Trek” celebrates it’s 50th anniversary as one of Hollywood’s mainstay franchises. In this “Larry King Now” clip, the original Captain Kirk, William Shatner, explains why it’s maintained it’s popularity all these years. Shatner gets philosophical and credits people’s curiosity of the unknown, saying “the mythology of ‘Star Trek’ and science fiction seeks to explain that which — what is dark matter? Ninety five percent of the universe is composed of something we have no idea. We’ve never seen it. We just theorized it exists. We know nothing.” (Clip link below)

William Shatner also goes under the gun in Larry King’s signature rapid-fire Q&A segment, revealing his favorite episodes from “Star Trek” (hint: “the tribbles and the time warp thing”) and why he’d like to trade places with President Obama for a day. Shatner also shares the impact Captain Kirk had on people, saying “I frankly see a lot of military guys and innumerable times, commanding officers have told me they played “Star Trek” to give their officer cadets an idea of how to play command.” (Clip link below)

Plus, no topic is off the table when William Shatner takes on your social media questions, from his bromance with “Outlander” star Sam Heughan to if he’d appear on “The Blacklist” with James Spader, and the latest TV iteration of “Star Trek,” premiering next year. (Clip link below)

What the full episode by clicking the link below: