This is for my friends Down Under. 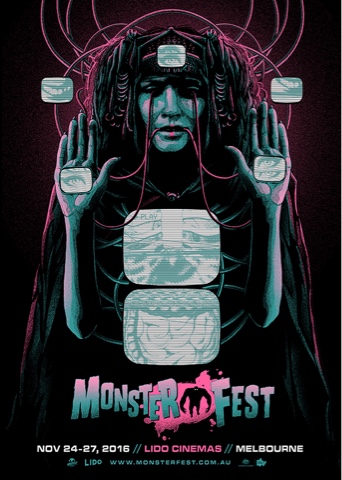 Monster Fest, Australia’s premier festival of cult, horror and the fantastic, returns for its sixth edition November 24-27, 2016 at the Lido Cinemas in Melbourne, with support from Screen Australia and Film Victoria – and they’ve just unveiled a poster to die for.

Illustrated by Canadian artist Matt Ryan Tobin, the 2016 poster ties in with this year’s theme of ‘ritual’; In particular, it points to our ritualistic relationship to screens of all sizes, which is especially relevant in a festival context. “We fell in love with Matt’s alternative posters for Suspiria, Halloween III, Nightcrawlerand more,” says Festival Director Kier-La Janisse, “We knew he could do something witchy that also tied into notions of broadcasting, screen ubiquity and ‘infected’ channels that invoke audiences to join the Cult of Monster.”

“I’m really excited about having someone of Chris D’s stature join the team this year,” says Janisse. “He’s got exquisite taste and brings a wealth of experience to the festival. Not to mention our returning shorts programmers and the dynamic duo of Andrew Nette and Dean Brandum, who are delving into the depths of cinema obscura to bring us the strongest repertory programming of any Monster Fest to date.”

Monster Fest 2016 will feature highly anticipated Australian premieres alongside festival favourites and repertory classics, with international special guests, industry panels and events, exhibitions, vendor booths, parties and more to be announced in the coming months. The festival was established in 2011 by Neil Foley and Grant Hardie as the exhibition arm of Monster Pictures, and since that time has garnered a reputation for showcasing some of the finest new independent genre films in the world, giving Australian audiences an opportunity to experience them on the big screen, both at the annual festival in Melbourne and at satellite events throughout Australia year round.

Posted by GenreOnline.net at 7:14 AM