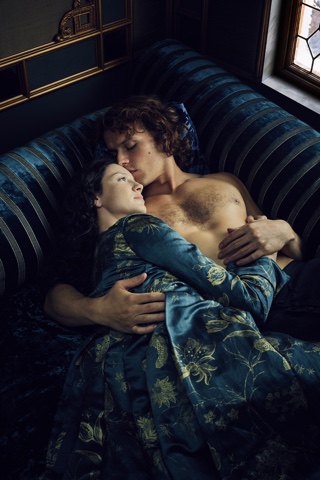 Voyager and Drums of Autumn

“Book Three” will be based on the third of the eight books in the Outlander series, entitled Voyager, followed by “Book Four” based on the fourth book in the series,Drums of Autumn.

CEO of Starz Chris Albrecht said, “’Outlander’ is like nothing seen before on television. From its depiction of a truly powerful female lead character, to the devastating decimation of the Highlander way of life, to what is a rarely seen genuine and timeless love story, it is a show that not only transports the viewer, but inspires the passion and admiration of its fans. On this 25th anniversary of the publication of the first book in the U.S., we are thrilled and honored to be able to continue the story that began with author Diana Gabaldon, and is brought to life by the incredibly talented Ronald D. Moore. There are no better storytellers for ‘Outlander’ than this team, both in front and behind the camera.”

“The world of Jamie and Claire is expansive and emotionally complex. The audience has rewarded Outlander with their praise and loyalty, and we know we will deliver the best seasons yet  in the years ahead,” said Jamie Erlicht and Zack Van Amburg , Presidents, U.S. Programming and Production, Sony Pictures Television. “Starz has been an incredible partner and has truly helped shape this into one of the most iconic premiere series on the air today.”

The first 16-episode run of “Outlander,” filmed on location in Scotland, debuted in August 2014 with the season averaging 5 million multiplatform viewers per episode and regularly ranking in the top 10 weekly cable programs among women throughout the season. “Outlander” ranks in the Top 5 Daily Nielsen Twitter TV Ratings every week.

The "Outlander" series spans the genres of romance, science fiction, history, and adventure in one epic tale. It follows the story of Claire Randall (Caitriona Balfe), a married combat nurse from 1945, who is mysteriously swept back in time to 1743. Upon her arrival, she is thrown into an unknown world where her freedom and her life, are threatened. But when she is forced to marry Jamie Fraser (Sam Heughan), a chivalrous and romantic young Scottish warrior, a passionate relationship is ignited. Now, Claire's heart is torn between two vastly different men in two irreconcilable lives.

The second installment of “Outlander” begins as Claire and Jamie arrive in France, hell-bent on infiltrating the Jacobite rebellion led by Prince Charles Stuart, and stopping the battle of Culloden. With the help of his cousin Jared, a local wine merchant, Jamie and Claire are thrown into the lavish world of French society, where intrigue and parties are abundant, but political gain proves far less fruitful. Altering the course of history presents challenges that begin to weigh on the very fabric of their relationship. However, armed with the knowledge of what lies ahead, Claire and Jamie must race to prevent a doomed Highland uprising, and the extinction of Scottish life as they know it.

Diana Gabaldon’s eight-book series has sold more than 26 million copies worldwide and all eight books in the series have graced the New York Times best-sellers list. The “Outlander” series spans the genres of romance, science fiction, history, and adventure in one grandiose tale.

Posted by GenreOnline.net at 11:35 AM