The Creator of HELLBOY, The Co-Creator of i,ZOMBIE and Acclaimed Horror Artist Christopher Mitten Unleash a Terrifying Meditation on The Nature of Evil 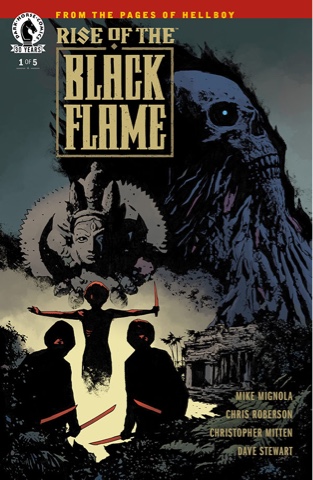 FOR IMMEDIATE RELEASE: MILWAUKIE, OR— This September, legendary Hellboy creator Mike Mignola, iZOMBIE co-creator Chris Roberson, Criminal Macabre and 30 Days of Night artist Christopher Mitten, award winning colorist Dave Stewart and cover artist Laurence Campbell will present RISE OF THE BLACK FLAME. This five issue miniseries from Dark Horse Comics will present a dark horror story about an ancient, evil power. In RISE OF THE BLACK FLAME, young girls are going missing from the cities of Siam, and the trail leads to the jungle hideout of a bloodthirsty cult-- the Cult of the Black Flame.

"There have been several villains in Hellboy’s world who’ve been called the Black Flame, and the striking visual of a skeleton burning with dark flames is pretty hard to beat,” said co-writer Chris Roberson. “In RISE OF THE BLACK FLAME, we reveal that before there was a man called the Black Flame, there was an ancient cult hidden deep in the jungles of Southeast Asia known by that name. We plumb the depths of cruelty and ruthlessness that groups of people are capable of reaching, and explore how this cult which reaches back to prehistoric times is connected to the most dangerous villain in the history of the Hellboy books.”

"After all these years it’s still so exciting to find new corners (or in this case a giant shadowy, uncharted abyss of horror) of the Hellboy world left to explore," said Mike Mignola.

“It is tremendous fun--and a little surreal--to be given the chance to dive into this fantastic universe,” said Christopher Mitten. “Mike and Chris (with whom I've long wanted to work) have concocted a fantastic story, and then there's Dave Stewart...I mean, KNOWING Dave would be coloring and then actually SEEING his artistry in action are two wholly different things. Getting a chance to dip my toe into this expansive world has made me want to dig in and explore more of it, to go off into little corners and find what strangeness, what beauty, lurks there.”

RISE OF THE BLACK FLAME #1 (of 5) goes on sale from Dark Horse Comics on September 7.  Preorder your copy today at your local comic shop!