The game where even changing weapons makes you feel a bit sick, is now on Steam Greenlight

The bowels of a living nightmare – June 30, 2016 – Straight out of the twisted minds at Serbian game developer Ebb Software, SCORN is a disturbing creep through an oozing world of organic otherworldly horror. Heading to PC in 2017, SCORN can be supported starting today on Steam

Check out the new teaser trailer for an ominous sense of what lies ahead: https://www.youtube.com/watch?v=MvBo_rKleNw

The first person gameplay in SCORN is a glistening combination of gunplay and puzzle solving, with the environment and the creatures it disgorges doing their utmost to confound your progress. That's not to say every inhabitant you meet wants to eviscerate you - most of them don't care about you one way or the other.

All of the storytelling happens in-game, with no cut-scenes to distract you from the grisly reality of the living, breathing (throbbing, dripping) world you're in. But keep your eyes open - the game won't show you any sympathy if you miss something important on your uneasy travels. Everything has a reason and purpose - you just need to work out what it is.

"We are trying to create something so unsettling it will make you think about the ideas and themes of the game long after you've finished playing," said Ebb Software's Ljubomir Peklar.

The environments in SCORN are entirely handcrafted, firmly bucking the procedural trend, while its storytelling through gameplay, non-linear narrative, and puzzles on a grand scale turn SCORN into an impressionistic horror show of impressive scope and imagination.

Get more creeped out about SCORN here: http://www.scorn-game.com/

To help the team at Ebb Software manage the massive scope of development on SCORN and get the game in the hands of players quickly, they are planning to release it in two parts, with the first part entitled "DASEIN" coming in 2017.

Support the SCORN cause on Steam Greenlight: http://steamcommunity.com/sharedfiles/filedetails/?id=709630328 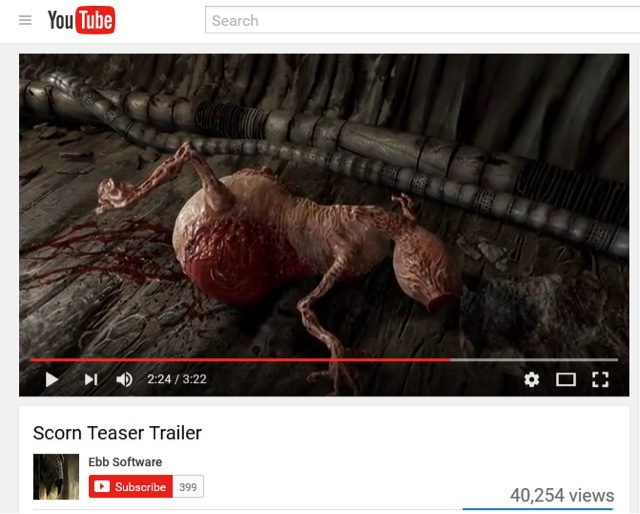