THE MAN WHO KNEW INFINITY debuts on Blu-ray, DVD, Digital HD and On Demand August 23rd 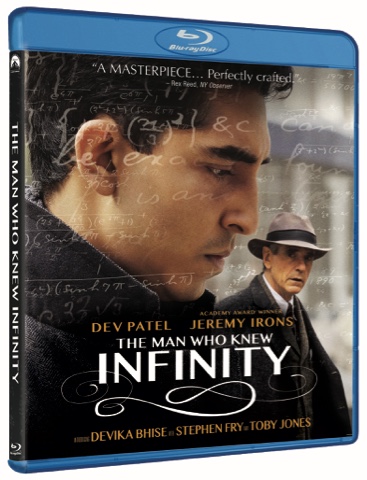 THE MAN WHO KNEW INFINITY

HOLLYWOOD, Calif. – The true story of “a brilliant and brave man who, without a doubt, deserves the title of genius” (Devan Coggan, Entertainment Weekly), THE MAN WHO KNEW INFINITY arrives on Blu-ray, DVD and Digital HD August 23, 2016from Paramount Home Media Distribution.  The film will also be available for sale or rental from cable, satellite and telco providers through IFC Films.

Academy Award® winner Jeremy Irons (Reversal of Fortune) and Dev Patel (Slumdog Millionaire, The Best Exotic Marigold Hotel) star in this enthralling true story of a friendship that forever changed mathematics.  In 1913, Srinivasa Ramanujan (Patel), a self-taught Indian mathematics genius, traveled to Trinity College, Cambridge, where over the course of five years, he forged a bond with his mentor, the brilliant and eccentric professor, G.H. Hardy (Irons), while fighting against prejudice to reveal his mathematic genius to the world. THE MAN WHO KNEW INFINITY “is not so much a film about understanding the numbers, but understanding the men who made us see their merit, and the passion that drives each of us to find the true meaning in our lives.” (Miriam Di Nunzio, Chicago Sun-Times).

THE MAN WHO KNEW INFINITYBlu-ray is presented in 1080p high definition with English 5.1 DTS-HD Master Audio and English, English SDH, Spanish and French subtitles.  The Blu-ray includes the film in high definition.

THE MAN WHO KNEW INFINITYDVD is presented in widescreen enhanced for 16x9 TVs with English 5.1 Dolby Digital and English, French and Spanish subtitles.  The DVD includes the feature film in standard definition.

Posted by GenreOnline.net at 10:25 AM