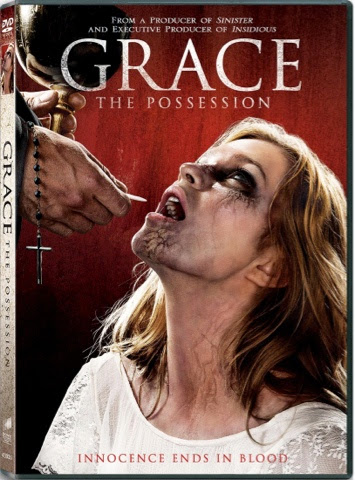 A Chilling Twist to the Classic Possession Horror Story

CULVER CITY, Calif. (Aug. 18, 2014) –Just in time for Halloween, a producer ofSinister and executive producer of Insidiousbrings a chilling twist to the classic horror story when the terrifying GRACE: THE POSSESSION debuts on DVD and Digital HD Oct. 28 from Sony Pictures Home Entertainment. Alexia Fast (Jack Reacher) plays the title role of Grace, an 18-year-old Catholic girl who moves away to college, never having sipped alcohol, done drugs, or had sex.  But something dark comes over her, and her purity is taken as she becomes possessed by demonic forces.  The film offers audiences a unique first-person perspective of the possessed like never seen before.  The cast also features Lin Shaye (Insidious franchise), Alan Dale (“Lost”), Alexis Knapp (Pitch Perfect) and Joel David Moore (Avatar).

GRACE: THE POSSESSION is a story told like never before - through the eyes of the possessed.  Grace (Alexia Fast) is a beautiful, naive, virginal college freshman trying to deal with campus culture and her outgoing new roommate.  But when a terror takes over her body and unleashes chaos, Grace returns to the cold clutches of her severe grandmother (Lin Shaye) and the strict rules of the Church.  Haunted by the horrific death of her mother and her deeply ingrained destructive urges, Grace must stop the demon inside before it’s too late.

GRACE: THE POSSESSION has a run time of approximately 88 minutes and is rated R for sexual content/violence/disturbing images, some drug and alcohol use, and language