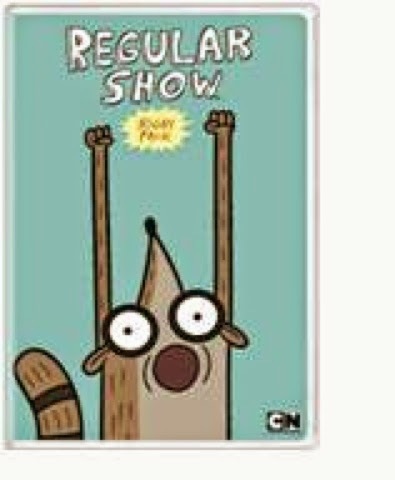 Move over, Mordecai; this all-new DVD release from Cartoon Network is all about Rigby. Cartoon Network today unveiled details on its latest Regular Show release, which will focus on the series’ mischievous raccoon, Regular Show: Rigby Pack. Available nationwide beginningSeptember 9, the episodic DVD collection will feature 16

Rigby-rrific episodes. Regular Show fans will want to add Rigby Pack to their steadily-growing collection of Regular Show DVDs, joining the likes of Regular Show: Mordecai and Margaret Pack, Regular Show: The Best DVD In the World* (At This Moment in Time), and the first three full-season home entertainment releases of the series.

Regular Show: Rigby Pack will be available for the suggested retail price of $19.82, featuring the following episodes:

4. Rigby in the Sky with Burrito

5. Return of Mordecai and the Rigbys

11. A Bunch of Full Grown Geese

12. Journey to the Bottom of the Crash Pit

Regular Show is an Emmy® Award-winning Cartoon Network original series created by J.G. Quintel that follows two best friends and park groundskeepers, Mordecai the blue jay and Rigby the raccoon, whose attempts to escape their everyday boredom take them to fantastical – and sometimes unintended – extremes. Maintenance duties for Rigby and Mordecai are just dull enough to somehow propel the pair into different wild shenanigans each episode. Their boss, the gumball machine Benton, does not enjoy having to manage their antics. However, Rigby and Mordecai’s insane escapades often delight Pops, a talking lollipop, who has spent his entire life in the park.

Since its September 2010 debut, the series continues to thrive on Cartoon Network, posting ratings that are anything but regular. During its fifth and current season on the network, Regular Show ranks as the top show in its time slot among boys 6-14 and kids 6-14, according to Nielsen Media Research data. Cartoon Network continues to keep Regular Show fans laughing by rolling out new episodes on Monday nights at 7:30 p.m.(ET/PT) with multiple replays throughout the week. Fans can also enjoy the many Regular Showcharacters through purchasing the many officially licensed consumer products, including a master toy line from Jazwares. Collectors and fans can findRegular Show merchandise at Toys R' Us, Hot Topic, Journey’s Kids, Kohl's and Spencer’s retailers nationwide with a full line of apparel and accessories for both kids and adults.

Cartoon Network will support the release of Regular Show: Rigby Pack with a kid-focused marketing campaign utilizing broadcast advertising on Cartoon Network, as well as a comprehensive online campaign featured on CartoonNetwork.comand engagement with the show’s over 5.5 million Facebook fans.