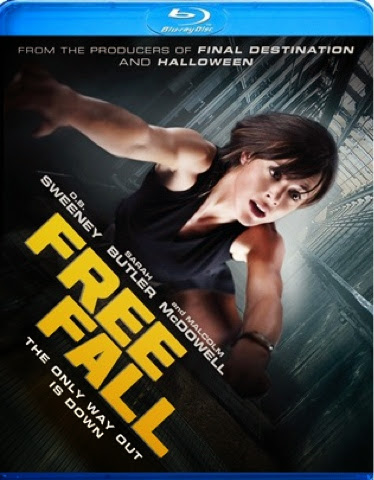 From the producers of the HALLOWEEN and

ANCHOR BAY ENTERTAINMENT TAKES THE ELEVATOR TO TERROR WITH

ON BLU-RAY™ AND DVD OCTOBER 28TH

The Only Way Out...Is Down

BEVERLY HILLS, CA – Just like people, corporations can hold secrets. And for those who uncover them, silence is not only golden, but sometimes it is the difference between life and death. On October 28th, Anchor Bay Entertainment will present the intense suspense thriller Free Fall on Blu-ray™ and DVD. The feature directorial debut of Malek Akkad (producer of the Halloween franchise), Free Fallis a nail-biting journey through the ruthless and potentially deadly corporate jungle. Boasting a stellar cast which includes D.B. Sweeney (Taken 2, Fire in the Sky, the upcoming “To Appomattox” miniseries), Sarah Butler (I Spit On Your Grave, The Demented, Treachery), Ian Gomez (“Cougar Town,” My Big Fat Greek Wedding) and screen legend Malcolm McDowell(A Clockwork Orange, The Artist), Free Fall will do for elevators what Alfred Hitchcock’s Psychodid for showers. The SRP is $26.99 for Blu Ray ™, $22.98 for DVD.

A top executive is killed in an apparent suicide leap from the skyscraper headquarters of Gault Capital. But when the dead man’s loyal protégé Jane Porter (Butler) uncovers some startling criminal evidence, the corporation calls in their “crisis manager” Frank (Sweeney) to silence her forever. Eluding her pursuer, Jane soon finds herself trapped in an elevator between floors on a holiday weekend in a very empty building.

With their cat and mouse game seemingly at check-mate, Jane must summon all her courage and wits to escape. But she soon discovers that surviving a cold-blooded killer may mean a very long drop to the ground floor.

Posted by GenreOnline.net at 12:19 PM