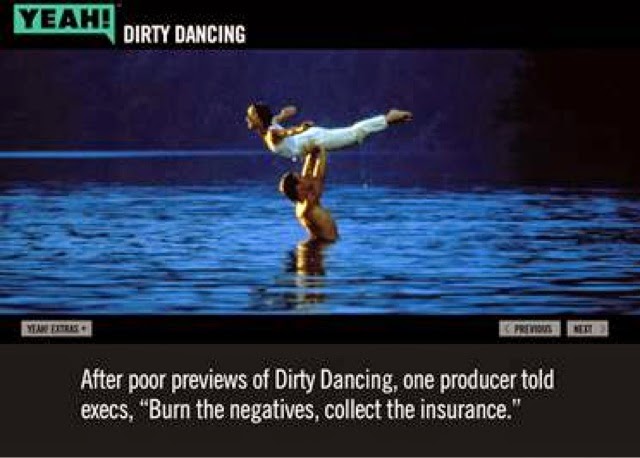 To commemorate the 27th year of the iconic summer flick Dirty Dancing, AMC Networks’ movie streaming service YEAH! will be offering film fans a three-day, non-stop lovefest of the 80’s classic with a bevy of in-depth facts, quotes from the stars, and much more.

From August 22-24, Dirty Dancing aficionados will have the chance to relive every salsa step, iconic lift, and love scene in true YEAH!-version fashion, giving viewers access to a rich layer of curated content integrated into the screen below the film as it plays.  The 72-hour movie streaming event includes special features – movie lovers can only get from YEAH! – like quizzes, polls, and behind-the-scenes stories about the moves, the music, and the stars of Dirty Dancing.

Unlike DVD extras or Blu-ray features, the YEAH! iPad app delivers information instantly, scene-by-scene, where and when you want it during the movie – content that can be switched on or off with a single tap of the finger.  With 400-500 curated elements, the encyclopedic depth of content included in this and all YEAH! editions of iconic films can turn any fan into an instant expert on the movies they love.

YEAH! is honored to work with leading directors, writers and actors on the curation of the films, featuring exclusive interviews, little known facts and intimate stories.  Director Richard Linklater hailed YEAH! as, “a film geek paradise,” while horror legend  Wes Craven said, “I learned things about my movies even I didn’t know!”  The New York Times calls the YEAH! experience "illuminating … everything you wanted to know about [the film] plus the film itself,” while Entertainment Weekly says YEAH! is "the only time we've really loved a know-it-all.”

To help get the party started, YEAH! has also teamed up with women’s magazine BUST to provide the tools needed to make it a Dirty Dancing marathon to never forget!  Film enthusiasts will have the chance to learn fun facts and enjoy party favors like:

·         Patrick “Johnny Castle” Swayze was picked for his role from a headshot (the writer of the film had no idea who he was);

·         Some of the dancers had passed out due to heat exhaustion during shooting;

·         Downloadable Dirty Dancing-themed cocktail recipes (including “The Pachenga” and “The Kellerman’s Kooler”);

Dirty Dancing fans can sign-up or sign-in to have the time of their lives from Aug. 22-24, courtesy of YEAH! To watch Dirty Dancing, users can download the YEAH! app on the iPad for free from the App Store on iTunes or visit the website,www.yeahtv.com, and enter promo code BUST. To be a part of the YEAH! and BUST fun, folks can register at BUST.com/yeahtv.