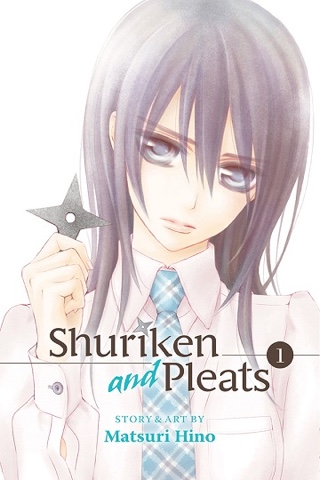 SHURIKEN AND PLEATS, the story of a schoolgirl who’s also a ninja in modern-day Japan, is the latest title from Hino, who created the pivotal shojo series, VAMPIRE KNIGHT (also published by VIZ Media; rated ‘T+’ for Teens).

SHURIKEN AND PLEATS is rated ‘T’ for Teens and will be published in print under the Shojo Beat imprint with an MSRP of $9.99 U.S. / $12.99 CAN. The series also launches digitally on March 1st via VIZManga.com and the VIZ Manga App (iOS and Android), as well as from the Nook, Kobo, Kindle, iBooks, comiXology, and GooglePlay stores. New volumes of the series, which is ongoing in Japan, will be released twice a year.

When the master she has sworn to protect is killed, Mikage Kirio, a skilled ninja, travels to Japan to start a new, peaceful life for herself. But as soon as she arrives, she finds herself fighting to protect the life of Mahito Wakashimatsu, a man who is under attack by a band of ninja. From that time on, Mikage is drawn deeper into the machinations of his powerful family.

“Matsuri Hino returns with SHURIKEN AND PLEATS, a story about a skilled female ninja who is striving to find a new life for herself,” says Nancy Thistlethwaite, Senior Editor. “We invite readers to savor all the action and intrigue in this beautifully illustrated new manga series.”

Matsuri Hino burst onto the manga scene with her debut title, Kono Yume ga Sametara (When This Dream Is Over), which was published in Japan in LaLa DX magazine. Already possessing strong artistic talent, Hino became a manga artist a mere nine months after she decided to pursue it as a professional career. With the success of her popular series, CAPTIVE HEARTS and MERUPURI (both also published by VIZ Media), Hino has established herself as a major player in the world of shojo manga.

Posted by GenreOnline.net at 9:15 PM