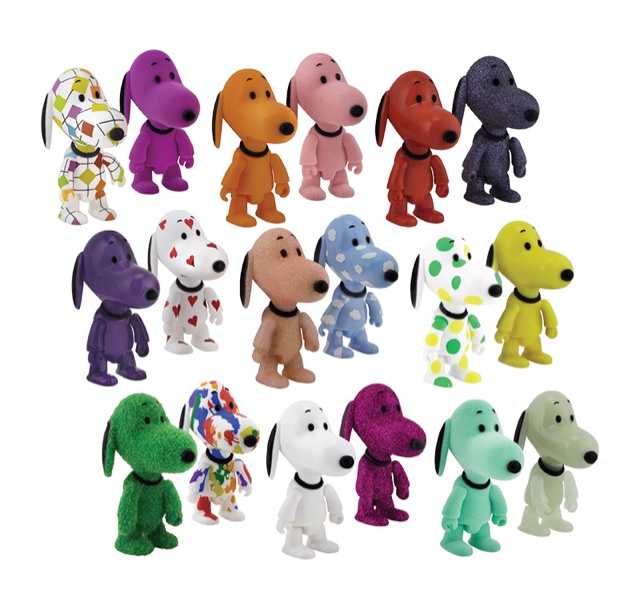 FOR IMMEDIATE RELEASE: NEW YORK, NY—Dark Horse Deluxe will produce a mystery box assortment of two-inch figures in the popular mini Qee format that will put a unique design spin on Snoopy, the lovable beagle from the popular Peanuts comic strip.

Dark Horse sees Snoopy as a must-have for the company’s designer line of collectible toys and has created variations of color and design to pique the interest of customers. The first collection offers eighteen different versions of the figures in various colors and with unique surface treatments, including metallic, flocked, black-light sensitive, glitter, and glow in the dark.

“We have worked with Peanuts for many years, and to see this fun take on Snoopy is a thrill,” Dark Horse Product Development head David Scroggy said. “The mystery box format means that which design is inside is a surprise. Some are common and some are rare. It is the thrill of the hunt as consumers chase after the rarest of the variants.”

This all-new assortment of colorful designs, featuring an array of colors and exotic surface treatments, is sure to stun both collectors and casual fans at their first presale appearance at Toy Fair 2016! All eighteen designs will be on display at the Dark Horse exhibit booth (#4845) at the Jacob Javits Center.

Slated for release in summer 2016 for the US and Canadian markets only, the collectible figures will be produced and sold in a fifteen-figure mystery box counter display with a retail price of $6.99 per figure.

Posted by GenreOnline.net at 7:21 PM