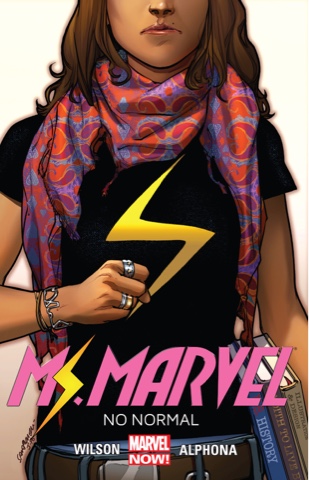 Marvel Takes Home Highest Praise at the “Cannes of Comics”

New York, NY— Feb 1, 2016 — Every year the Angoulême International Comics Festival recognizes the best and brightest creators from around the world for their contributions to the comics industry. Marvel is pleased announce that Ms. Marvel Volume 1: No Normal, written by G. Willow Wilson with art by Adrian Alphona, won the prestigious award for “Best Series” this past weekend in Angoulême, France.

Humbled by this award, Ms. Marvelseries writer G. Willow Wilson said, "The whole Ms. Marvel team is honored to accept the Angouleme prize for best series. Working on this book and connecting with readers and fans has been a unique joy for all of us. At a time when it sometimes seems the world is in a state of constant conflict, it is a privilege to work on a series that unites us through adventure, humor and a celebration of our common humanity. Thank you to everyone who believes in Kamala Khan, and thank you to Angouleme."

As the only American comic book publisher to be recognized this year for their contributions to the international comic book community, this is also the first time that Marvel Comics has received the respected and significant award of "Best Series". Marvel would also like to congratulate all the other nominees and winners at the 2016 Angouleme International Comic Book Festival.

Ms. Marvel, the groundbreaking heroine that has become an international sensation! Kamala Khan is an ordinary girl from Jersey City - until she is suddenly empowered with extraordinary gifts. But who truly is the all-new Ms. Marvel? Teenager? Muslim? Inhuman? Find out as she takes the Marvel Universe by storm! As Kamala discovers the dangers of her newfound powers, she unlocks a secret behind them as well. Is Kamala ready to wield these immense new gifts? Or will the weight of the legacy before her be too much to handle? Kamala has no idea either, but she's here to prove that she is the next great Marvel Super Hero!

If you haven’t checked out these award winning series, head out to your local comic book retailer and pick up this great collection!