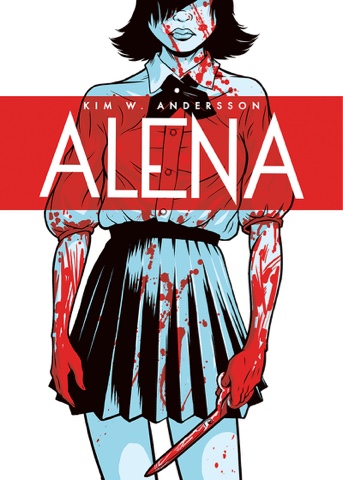 FOR IMMEDIATE RELEASE: MILWAUKIE, OR— Kim W. Andersson is making waves in the international comics and film community. His original Swedish graphic novel Alena was adapted into a feature-length film in Sweden that just received a critically acclaimed US debut at the Santa Barbara International Film Festival 2016. Now the graphic novel will see full US distribution through Dark Horse Comics.

Alena’s life is a living hell. Since she arrived at a snobbish boarding school, she’s been harassed every day by Philippa and the girls on the lacrosse team. But Alena’s best friend Josephine is not going to accept that anymore.

Not from the counselor or the principal, not from Philippa, and not from anyone else at that horrid school. If Alena does not fight back, then Josephine will take matters into her own hands.

There’s just one problem . . . Josephine has been dead for a year.

Author and artist Kim W. Andersson (The Complete Love Hurts) is the winner of the Swedish Comics Academy’s Adamson statue—Sweden’s most prestigious comics award—and a creator to watch in the coming year.

“Kim W. Andersson’s graphic novel Alena has unsurprisingly been described as Let the Right One In meets Show Me Love set in a boarding school. Count on vengeance, violence and broken teenage hearts.”—Stockholm Film Festival
“Not for the faint of heart, but wicked fun for the right audience.”—Booklist
“Kim Andersson is able to play around with many different styles, and it works. He does a good job bringing a different side of love to life.”—San Francisco Book Review
Also available from Kim W. Andersson:
The Complete Love Hurts TPB | 978-1-61655-859-8 | $19.99
Posted by GenreOnline.net at 5:03 PM